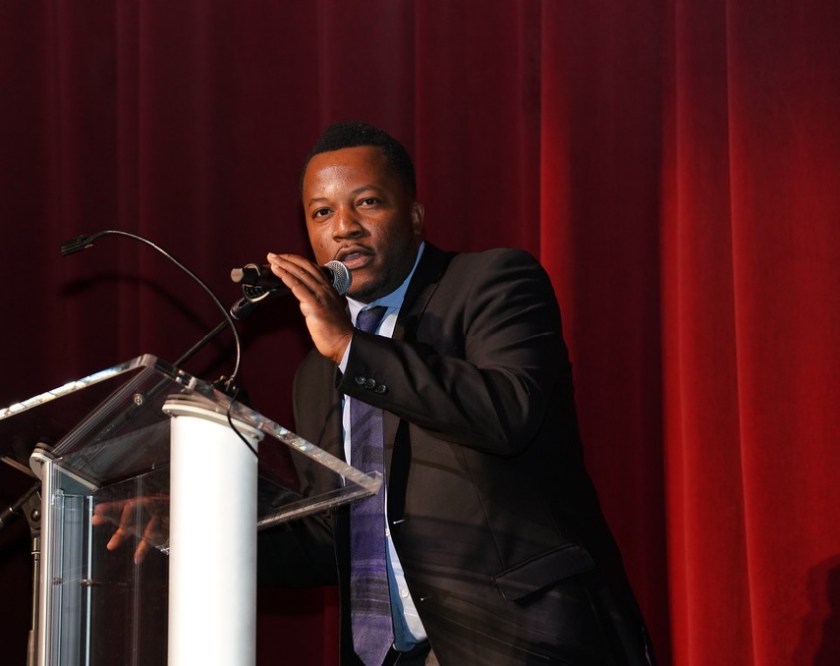 A forward-thinking writer and a recognized authority on race, media and economic inequality issues, Bankole Thompson, one of the nation’s leading journalists, whose forceful writings and courageous voice pricks the conscience of the powerful, will release an anthology of his journalistic work next year. The book will cover some his most definitive and penetrating writings and speeches on American democracy and the quest for racial and economic justice at a time when the nation is facing a reckoning after the death of George Floyd.

Thompson, who is the editor-in-chief and dean of The PuLSE Institute, Detroit’s national anti-poverty think tank, is a distinguished journalist, author and sought-after public speaker. He is a twice-a-week opinion columnist at The Detroit News, where he writes about politics, culture, public opinion, social and economic justice issues and the presidency. He is the host of REDLINE, a daily two-hour political commentary and news analyses show on 910AM Super Station-Detroit.

The book, which promises to be the most important collection of Thompson’s writings and speeches to date, will deal with issues from politics, economy, leadership to civil rights. Each chapter in the comprehensive anthology is accompanied by an introduction from a subject matter expert.

For example, Dr. Bernard LaFayette, civil rights leader and top aide of Reverend Martin Luther King Jr., who served as the National Coordinator of the historic 1968 Poor People’s Campaign, the watershed moment of the Civil Rights Movement, wrote the introduction to the first chapter of the book, which opens with a 2020 keynote address that Thompson was invited to deliver for the 20th Slavery to Freedom Lecture Series at Michigan State University.

“This talk could not be more timely. The issues of racism, White supremacy and Black Lives Matter, among others, are at the forefront of the news,” LaFayette wrote in a deeply reflective introduction in the book, where he dwelled on the civil rights pilgrimage both he and the late civil rights icon and Congressman John Lewis took alongside Dr. King. LaFayette and Lewis were college roommates at the American Baptist Theological Seminary in Nashville.

In 2018, Thompson, was honored by civil rights leader Rev Jesse Jackson, the president and founder of the Rainbow PUSH Coalition with the organization’s “Let Freedom Ring Journalism Award” during its annual Martin Luther King Jr. Day, which also marked the 50th anniversary death of Dr. King. In the nomination letter, Jackson, noted that Thompson, one of the leading Black journalists in the nation, was being awarded for his  “persistent and passionate op-eds on poverty and racial justice that clearly prick the conscience of policy makers and bureaucrats,” as well as “your community events that empower the voiceless” at a ceremony at Cobo Convention Hall in downtown Detroit, where Dr. King, delivered the first draft of the “I Have a Dream” speech.

Thompson has written four books including a pair on former President Barack Obama, the culmination of a series of exclusive sit-down interviews with Obama. The books, “Obama and Black Loyalty,” deals with a myriad of issues in Black America, and “Obama and Christian Loyalty,” examines Obama’s faith posture, Black theology and the politics of the religious right.

His perceptive views and searing analysis on urban America and the debilitating issues of race have been sought by media outlets including CNN. During the lead up to the 2020 presidential debate in Detroit, the nation’s largest Black city, CNN host John King sat down with Thompson and David Axelrod, former senior adviser to President Obama, to discuss how urban issues will play out in the campaign.

Days after George Floyd, a Black man was killed in Minnesota by White Minneapolis police officer Derek Chauvin, De Standaard, the leading Dutch-language newspaper in Brussels, Belgium, the home of the European Union, reached out to Thompson to seek his opinion about Floyd, police brutality, and what it portends for American cities like Detroit. He was interviewed in an extensive hour long Q&A with Ine Roox, foreign desk reporter covering the United States for De Standaard, which has a daily readership of 715,000, and has been publishing since 1918.

In the interview, Thompson, talked about the wider implications of Floyd’s death on American democracy, and what it means for the administration of justice in urban cities. He told the major European newspaper that the Black rage that the rest of the world is seeing on the streets of America, “spans several generations,” adding, “What we now see on the streets of America is the pain, the suffering that generations of Blacks feel and have already felt because of the racist practices of the police.”

The day after officer Chauvin was found guilty of all charges in the Floyd case in April of this year, Thompson, underscored the significance of the monumental verdict in a front page column in The Detroit News, where he called it a “shot across the bow for the entire law enforcement apparatus of this nation, especially for those who have chosen brutality over constitutional policing.”

“It was gratifying editing Bankole’s earlier manuscripts, and I can’t wait to edit his nascent work, which I am sure would be refreshingly incisive,” said C. Paschal Eze, a renowned book editor and marketing consultant, who has served as Thompson’s longtime literary editor.

In 2015, the University of Michigan Bentley Historical Library, requested to establish the “Bankole Thompson Collection,” a comprehensive and digital archive of his works for posterity. The Bentley Library houses the papers of every Michigan governor and prominent players in the state.

The Bentley in a letter described Thompson as a “most important journalist, author and observer of Detroit and Michigan,” adding that his work has been “important to the overall history of the recent past and current affairs.”