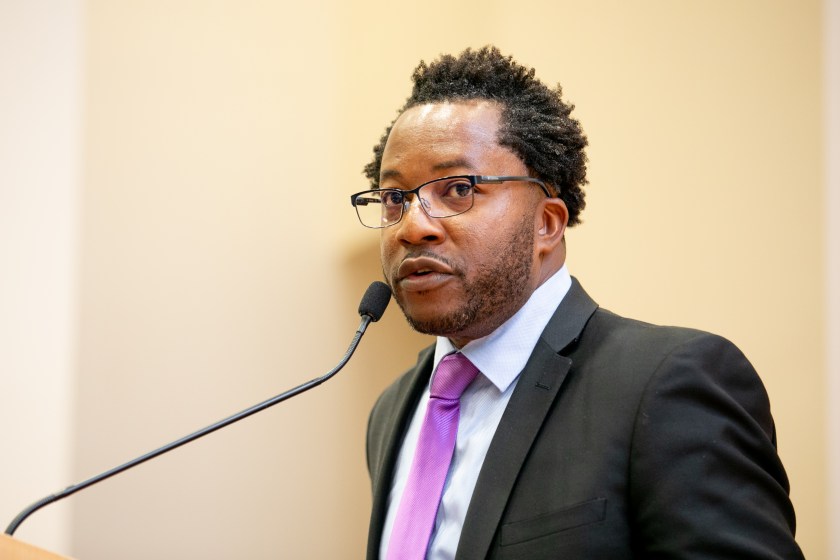 For years the nationally renowned Detroit-based Black journalist and cultural critic Bankole Thompson, whose work is known for probing uncomfortable issues of race, freedom and justice, has challenged business leaders to be conscientious and join the fight against economic inequality. Known for pricking the conscience of the powerful, Thompson, has insisted that major corporations should not only be concerned about their bottom line but about the endemic crisis of poverty that has made cities like Detroit ground zero of the urban crisis.

For example, in a keynote lecture he delivered last year for Brown University 2022 Black History Month Program led by Brown President Christina Paxson, Thompson, spoke on the theme “Race and Democracy in the Era of Black Lives Matter: Why Major Institutions Must Address the Fierce Urgency of Racial Justice.” In the keynote, which touched on the state of our democracy, he called on corporations to bend the arc of the moral universe towards justice while challenging Ivy League schools like Brown to be examples of racial equity in the nation.

Now his definitive book, Fiery Conscience: A Treatise on Two Decades of the Impactful Journalism of Bankole Thompson, which captures his more than two decades of speaking truth to power and will be released later in 2023, is receiving praise from prominent business leaders across the spectrum of the corporate world in metro Detroit who have closely followed his work as a thought leader over the years.

The book, a compendium of analytical essays about the impact of Thompson’s journalism across the political and cultural spectrum, is a vivid and penetrating account from the lens of individuals who have observed his work as well as those who have been positively impacted by his knack for holding power accountable.

“Fiery Conscience is a provocative and insightful compilation of topical essays reflecting the impact Bankole Thompson continues to have as an advocate and journalist. Over his career, Bankole has given a voice to many issues often unexplored by mainstream media and policy makers,” wrote Daniel J. Loepp, the president and CEO of Blue Cross Blue Shield of Michigan in his endorsement of the book. “I especially appreciate the way he examines and seeks solutions for critical issues affecting historically disadvantaged people – issues that continue to confront our society despite decades of effort and focus We are living in a time when understanding, empathy and conscience are required of all citizens. In reading the passages of this book, I encourage us to examine our own thoughts and actions in confronting instances of injustice and helping to build a more equitable society.”

Cynthia Pasky, the president and CEO of Strategic Staffing Solutions and the chairperson of the Downtown Detroit Partnership, hailed the book while calling Thompson a significant voice for disenfranchised communities.

“The Fourth Estate’s role in American democracy is to inform and educate the public, particularly around politics and public policy, and Bankole Thompson’s voice rings clearly over the noise of opinions and news. He is an unflinching, uncompromising journalist who uses his platform – whether it is newspaper, radio or even The PuLSE Institute – to hold leaders accountable for their words and deeds,” Pasky said. “He is a true guardian of the vulnerable and a much-needed activist against all that is wrong in our society. We need Bankole’s work now more than ever and Fiery Conscience is his magnum opus.”

Jerry Norcia, the chairman and CEO of the Fortune 500 company DTE Energy in endorsing the book, said Thompson stands out as an important voice in journalism and public leadership in this age.

“During a time when sound journalism is often obscured by tremendous distractions, Bankole Thompson stands clear of that noise as a respected author, journalist and opinion columnist. I can personally attest that Bankole has never held back when addressing important issues in our community, yet he does not give in to the lure of sensationalism for the sake of attention. Instead, he listens to others – looking for both the truth and real problems that help us get to the core of the matter at hand,” Norcia wrote. “One of Bankole’s most prominent skills is to give others a voice and this is illustrated nowhere better than in this book. Rather than tell his story in his voice he asks others to recount their impressions of his work.  With this perspective I welcome you to look deep into Bankole’s Fiery Conscience and, together with me, enjoy the important stories told about one of the most prominent voices, not only in the Black community, but within our community as a whole.”

Alessandro DiNello, who previously served as president and CEO of Flagstar Bank, and is now the Chairman of the Board of New York Community Bancorp and Flagstar in his endorsement wrote, “The word that best embodies Bankole is unafraid. That trait comes through loud and clear in Fiery Conscience.”

Steve Grigorian, the president and CEO of the Detroit Economic Club, the organization of captains of industry also read the book and said, “In Fiery Conscience, Bankole compiles a variety of experiences which showcase his relentless advocacy for the voiceless. One constant with Bankole – he’s not afraid to leave the reader uncomfortable.”

Thompson, 43, is the executive dean and editor-in-chief of The PuLSE Institute, a national anti-poverty think tank, which was founded based on his work on race, democracy and poverty. He is a twice-a-week opinion columnist at The Detroit News, where his column on presidential politics, leadership, culture and socioeconomic issues appears on Mondays and Thursdays. He is host of the daily two-hour radio program REDLINE on 910AM Super Station-Detroit as well as the host of Sunday Nation with Bankole Thompson, a weekly public affairs and newsmaker television program, which airs on Sundays from 1pm-2pm on MyTV38 WADL-Detroit.

Janis F. Kearney, former journalist and newspaper publisher in Arkansas, who served as the first presidential diarist in the history of the White House under President Bill Clinton, wrote the book’s epilogue.

Kearney, a former fellow at Harvard University’s W.E.B. DuBois Institute, tells readers that Thompson’s didactic work is needed today, and that it is reminiscent of the journalistic crusades that were led by towering Black journalists in Arkansas and other places in the American South during the Civil Rights Movement.

“It is gratifying for a native of the Arkansas Delta region and child of cotton sharecroppers to know that we still have a social commentator and leader who remains an unapologetic advocate for the poor and downtrodden. While American politics is oftentimes a murky, messy undertaking; the practical, realistic, yet hopeful Bankole Thompson knows that good politics can mean social and economic change for the masses. And, that good politics can result in policies, laws and civil actions that make life better for the least of us and addresses the dignity of all—including America’s poorest,” Kearney wrote. “But, good politics doesn’t just happen. It needs advocacy and fiery voices like Bankole Thompson’s. Voices that worry the lawmakers at night, that remain, like ‘earworms’ in their subconscious as they make and act on decisions that are crucial and life-changing for everyday Americans.”

Reverend Canon Leonard L. Hamlin Sr., the Canon Missioner and Minister of Equity and Inclusion at the Washington National Cathedral offered a commendation for the book.

“The problems of our past are not resolved by turning a blind-eye, or by commitment to silence. Bankole Thompson’s needed witness displayed a courage and faith that inspires us to move beyond complacency and into prophetic action. His ‘Impactful Journalism’ has raised the uncomfortable questions and exposed circumstances that were in need of transformation,” Hamlin said. “It is a must read for those who have a concern for where we have been but more importantly for where we are headed as a community. By reading this work I was inspired to remember the words of Maya Angelou that stated, ‘You can’t really know where you are going until you know where you have been.’”