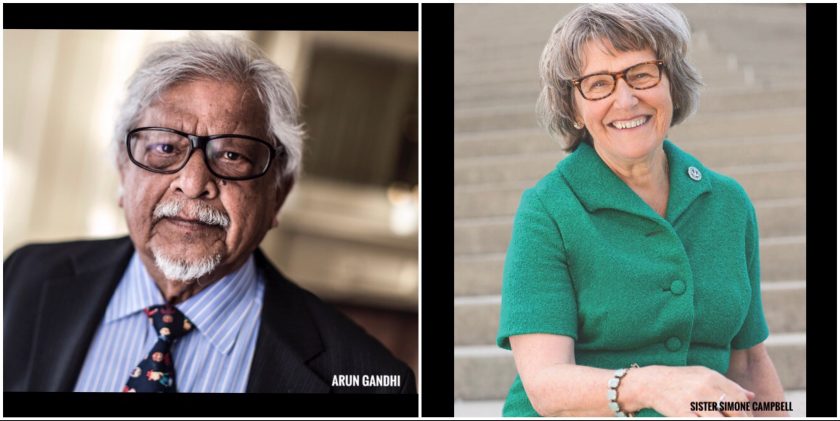 The announcement of Dr. Gandhi, the standard bearer of the Gandhi philosophy and Sister Campbell, a champion of Pope Francis’ message of social justice, brings a dynamic and transcending duo to the work of the newly established think tank devoted to fighting poverty in Detroit and the nation.

The PuLSE Institute (Institute for Public Leadership and Social Equity) launched on July 4, 2018 was inspired by the writings of Bankole Thompson, a prominent journalist and author. Thompson has been a powerful voice on the question of economic inequality through his insightful, impactful and impassioned Detroit News columns on extreme poverty. His writings continue to bring clarity to the dialogue on economic inequality and represent an urgent call to transformative action.

“My grandfather, M. K. Gandhi, said, ‘Poverty is the worst form of violence.’ Hence, I am honored to serve as an advisor in this attempt to eradicate poverty. Gandhi also said those who suffer oppression of any kind lose their self- respect and self-confidence. They begin to feel they are incapable of doing anything and have to depend on society for survival,” Arun Gandhi said. “The work to eradicate poverty must not be motivated by pity but by compassion. When we act out of pity, we give the poor hand-outs and feel we have done the good deed for the day. When we act out of compassion, we invest our time and energy to do something constructive to give the poor economic stability and build their self-respect and self-confidence so they take care of themselves.”

Sister Campbell for her part said, “Income and wealth disparity is one of the biggest crises of our day. I am excited to join a group that’s working on addressing the real-life implications for this crisis. May we make progress.”

The Detroit-based Institute is committed to deep analysis and examination of the broad spectrum of issues affecting the majority of people who are often left out of solution-based conversations about social inequality.

“Arun Gandhi’s work in following in the footsteps of his grandfather Mahatma Gandhi has been a remarkable journey for equality. We’re honored that Dr. Gandhi has joined The PuLSE Institute, bringing with him the weight of history and the universal legacy of the Gandhi family,” said Tina Patterson, president of the Institute. “Sister Simone Campbell has been one of our nation’s most significant voices for social change, embodying the global message of justice for the poor espoused by the distinctive moral leadership of Pope Francis. Her unbounded commitment to human dignity reflects the overall mission of The Institute.”

“Fighting poverty and social injustice is, like politics and business, a matter of numbers. The more people of like vision and vigor we have in each fight, the more the difference we can make in troubled families and communities around us. That’s why I am particularly pleased to welcome Dr. Gandhi and Sister Campbell to The PuLSE Institute where their exemplary experience will prove very valuable,” said board chair C. Paschal Eze, a stakeholder engagement expert and strong global voice on harnessing the power of ‘ethical capitalism’ to fight poverty.

The other members of the National Advisory Panel are: