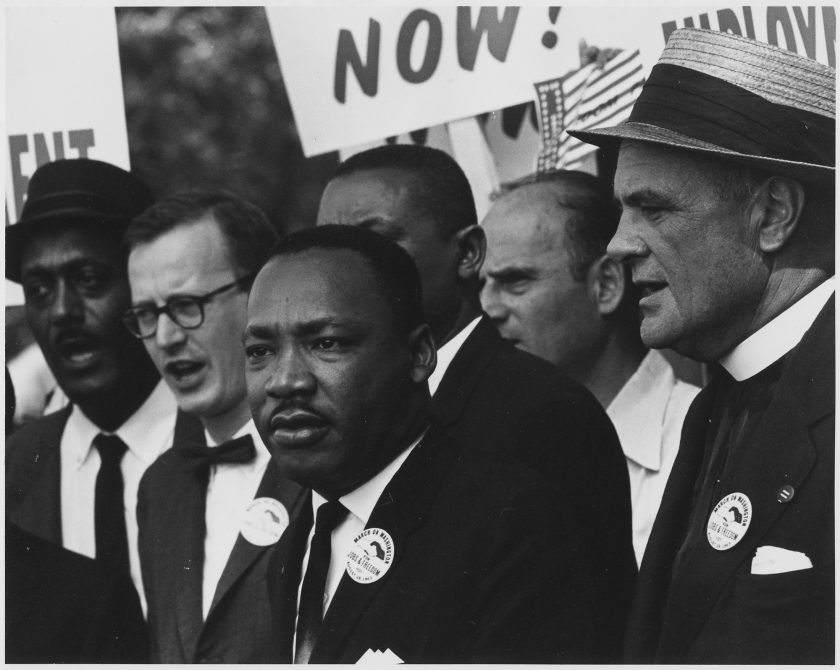 Editor’s Note: Tina M. Patterson is the president and director of research at The PuLSE Institute, Detroit’s independent and non-partisan anti-poverty think tank. For submission inquiries contact Bankole Thompson, the editor-in-chief of the Institute at info@thepulseinstitute.org

“The curse of poverty has no justification in our age. The time has come for us to civilize ourselves by the total, direct and immediate abolition of poverty.”

In this new decade of 2020, we continue to celebrate the life and legacy of Dr. Martin Luther King, Jr., who despite his death over 50 years ago remains one of history’s greatest and most venerable leaders.

Yet as this new decade begins, with the greatest abundance the world has ever known, coinciding with the largest wealth gap between the rich and the poor, we must reexamine King’s resounding message condemning the existence of poverty amidst abundant affluence.

Too often, Dr. King’s remarkable legacy begins and ends with the historic March on Washington, the 1963 event that drew an interracial crowd of 250,000 to the nation’s capital as King recited his trademark “I Have a Dream” speech. This speech certainly emphasized King’s philosophy of nonviolence and quest for peace and racial harmony, and demonstrated his bold and brilliant tactic of using direct action to influence policymakers to move toward more equitable legislation. However, as glorious, revering, and significant as the “I Have a Dream” speech was, it was just one portion of King’s voluminous body of work.

King lived five more years until his life was tragically cut short by the hands of an assassin. Yet, these later years of King’s life produced some of his most fervent, daring, critical, and intellectually stimulating work highlighting the massive contradictions between the wealth of the nation and the suffering of millions wallowed in poverty.

In his final testament, “Where Do We Go From Here: Chaos or Community?,” King blatantly but poignantly asks the question, “Why are there forty million poor people in a nation overflowing with such unbelievable affluence?”

He breaks the question down further, asking yet again, “Why should there be hunger and privation in any land, in any city, at any table, when man has the resources and the scientific know-how to provide all mankind with the basic necessities of life?”

King asked such direct, logical, and probing questions during a time when America’s racial tension was at an all-time high, with numerous riots breaking out in cities across the nation, including here in Detroit in 1967. Additionally, war was an ever-present reality in King’s time, as the Vietnam War consumed national attention and attracted a dedicated anti-war counter culture.

Yet rather than acquiesce to government policy and agenda that fueled war efforts, King took the most courageous stand against these ill-conceived actions and instead condemned not only the war, but the lack of government effort into implementing and enforcing policies for massive social transformation.

In his milestone speech, “Beyond Vietnam,” delivered at Riverside Church in New York in 1967, King noted this exact sentiment, stating:

“It seemed as if there was a real promise of hope for the poor, both black and white, through the poverty program. There were experiments, hopes, new beginnings. Then came the buildup in Vietnam, and I watched this program broken and eviscerated as if it were some idle political plaything on a society gone mad on war. And I knew that America would never invest the necessary funds or energies in rehabilitation of its poor so long as adventures like Vietnam continued to draw men and skills and money like some demonic, destructive suction tube. So I was increasingly compelled to see the war as an enemy of the poor and to attack it as such.”

This particular speech was viewed as a bold and new direction for King, inconsistent with the more optimistic message of peace and equality delivered years earlier at the March on Washington. However, King quickly reminded his audience that this speech was quite consistent to his commitment to justice for the poor, noting:

“Many persons have questioned me about the wisdom of my path. At the heart of their concerns, this query has often loomed large and loud: ‘Why are you speaking about the war, Dr. King? Why are you joining the voices of dissent?’ ‘Peace and civil rights don’t mix,’ they say. ‘Aren’t you hurting the cause of your people?’ they ask. And when I hear them, though I often understand the source of their concern, I am nevertheless greatly saddened, for such questions mean that the inquirers have not really known me, my commitment, or my calling.”

King was more than a man with a dream for peace. He was a man fully aware of the perils of his time, and a man unafraid to challenge the system to rise to the occasion in fulfilling its obligation to the least of these.

King readily understood that a nation that could spend billions on a war in another country easily and obviously had the same resources to commit to social advancement for the poor. King knew that, “There is nothing new about poverty. What is new, however, is that we now have the resources to get rid of it.”

Yet he also understood that the problem was not the issue of poverty itself or the resources to address it. As he accurately pinpointed in Where Do We Go From Here, “There is no deficit in human resources; the deficit is in human will.”

This is the same dilemma we still face as a nation, over 50 years after King’s identification of the problem. One need look no further than Detroit to observe the reserve of resources, but the lack of political will to put these resources to use to uplift impoverished residents and those who have otherwise been unduly burdened by city policy failures.

A case in point is the $600 Million over taxation of hundreds of thousands of Detroit residents whose property taxes were inflated from 2010-2016. During this same time period, multiple corporations have received the same amount of hundreds of millions of dollars in tax breaks, and the current administration has touted repeatedly that the city is in good financial standing.

However, rather than lead with compassion, responsibility, and determination to correct the wrongs of the city, Mayor Mike Duggan ignored accountability and retreated toward an excuse pitting those who paid their taxes against those who did not. Lack of political will is what led Mayor Duggan to give the answer he gave.

While the over-taxation disaster had the most detrimental effect on poorer residents who lost their homes due to inability to afford their taxes, in this majority black city, the black middle class population was likewise a victim of the over-taxation. Even though they were able to pay, they were still wronged and should also be compensated accordingly.

This unity for the black middle class to join hand in hand with the black poor in Detroit echoes King’s call for unity in Where Do We Go From Here, when he reminded us that: “The relatively privileged Negro will never be what he ought to be until the underprivileged Negro is what he ought to be. The salvation of the Negro middle class is ultimately dependent upon the salvation of the Negro masses.”

This MLK day, let us remember King’s resounding call not to take up arms in war, but to take up arms against poverty by demanding more from our political leaders who no doubt have the resources at their fingertips to address the problems of our time. And for those of us privileged with more resources and more access, just as Dr. King himself, it is our fight as well.

Given the time in which he lived, one can argue that he could have rested his laurels on the education he received alone, achieving these rare feats at an extremely young age and as a Black man during the height of the Jim Crow era.

Yet King, with a PhD from Boston University at age 26, risked his credentials, his reputation, and ultimately his life for the sake of the advancement of millions, particularly those trapped in the economic dungeons of poverty.

No doubt this will not be an easy journey, and the road ahead is filled with obstacles that might make one want to quit halfway through or walk away without even trying. However, to quit because it is difficult would dishonor the legacy of Dr. King. To quit without even trying would be to dishonor the legacy of Dr. King. And most dangerous of all, to remain silent in the midst of such egregious injustice would be an abomination of his legacy and betray the mission that cost him his life.

“In any social revolution there are times when the tail winds of triumph and fulfillment favor us, and other times when strong head winds of disappointment and setbacks beat against us relentlessly. We must not permit adverse winds to overwhelm us as we journey across life’s mighty Atlantic; we must be sustained by our engines of courage in spite of the winds. This refusal to be stopped, this ‘courage to be,’ this determination to go on ‘in spite of’ is the hallmark of any great movement.”

This is our time to rededicate ourselves to Dr. King’s overlooked but ever relevant and necessary mission of fighting against poverty.