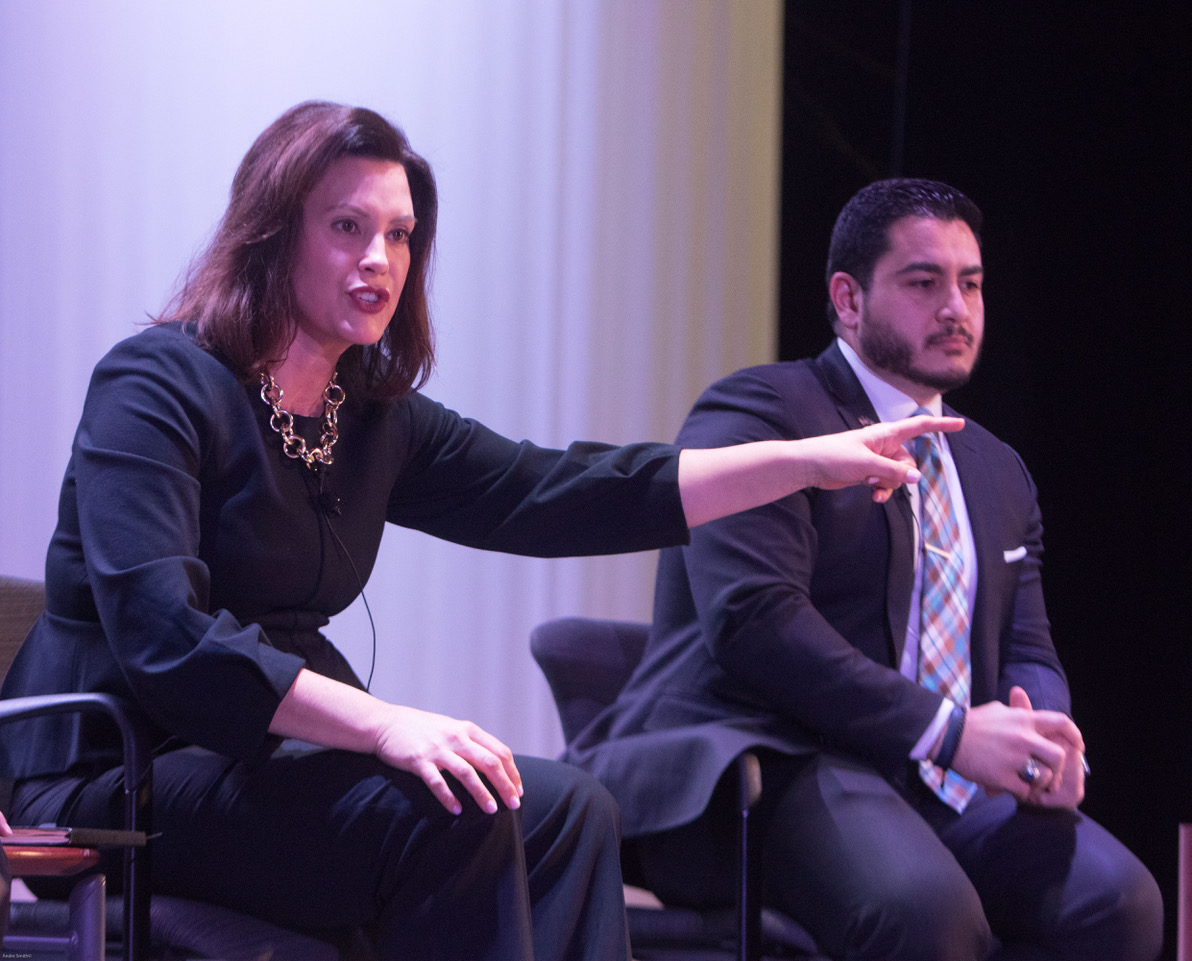 This column is part of The PuLSE Institute’s ongoing series, “Coronavirus and Poverty,” about how health inequities impact COVID-19. For information about this public health series email info@thepulseinstitute.org.

Three weeks after Michiganders were told of a coronavirus outbreak in the state, Governor Gretchen Whitmer decided to finally issue an executive order Saturday night mandating that water services be restored to all homes with families across the state in a bid to fight the dangerous pandemic of COVID-19. Public health experts have advised over the last several weeks that the frequent washing of hands can help reduce the spread of the deadly coronavirus, which is claiming lives not only in Detroit and the region but across the nation.

Whitmer’s decision comes months after unsuccessful pleas to the governor to issue an executive order to halt water shutoffs on poor people in Detroit, which has been a constant feature of the administration of Mayor Mike Duggan, a close ally of Whitmer. From an earlier appeal made by the Michigan chapter of the American Civil Liberties Union (ACLU) to incessant demands by water activists, the Whitmer administration flatly rejected all calls to intervene in Detroit before the arrival of COVID-19.

In turning down the cries to help poor Detroiters who were subjected to constant water shutoffs, Whitmer who campaigned as a change agent contradicted a promise to ensure that no Michigander faces shutoffs stating that, “We need clean drinking water to live, and no Michigander should suffer an interruption in their water service because of a delinquency in bill payments.”

Candidate Whitmer added, “I believe water to meet basic needs is a fundamental right and essential to public health, and I will work to ensure that everyone has access to a livable quantity of water at an affordable rate.”

But Gov. Whitmer did things differently from what she vowed to do in her “Clean Water for Michigan,” agenda when she was running to become the chief executive of the state. Since her election she carefully stayed away from the battle for access to water in Detroit until now, when it became too convenient and urgent to do so in the glare of the national spotlight.

That is why as Detroit, a city known for its high poverty rate stands vulnerable to the deathclaws of COVID-19, the governor’s Saturday night decision should be viewed as nothing, but a desperate and a last-minute effort to contain the coronavirus in a city that has already registered more than a thousand confirmed cases. The growing number of cases has made Detroit one of the hot spots for the virus.

In fact, to demonstrate the gravity of the situation in Detroit, the largest black city in America, the US Army Corp of Engineers, is currently working to retrofit the TCF Center (formerly Cobo Convention Hall) into an emergency hospital that will house 900 hospital beds to help the city combat the rise of the coronavirus.

Because Whitmer wants to be seen in the eyes of the nation as a governor who is working around the clock to fight the coronavirus, her latest executive order should not be interpreted as a sign of courage. It is a markedly opportunistic move because it is simply a decision that is easily linked to the pandemic. After all, health experts have emphasized repeatedly to the general public that water is a deterrent to coronavirus when people persistently use it to wash their hands.

“In a WXYZ interview in response to Whitmer telling citizens to wash their hands for 20 seconds, I asked Gov. Whitmer ‘How the heck could people in Detroit that do not have running water for five seconds because their water has been shutoff wash their hands?. The governor uttered an on-air incomprehensible vagaries,” recalls Sam Riddle, political director of the Michigan chapter of the National Action Network and a senior fellow at The PuLSE Institute. “We kept bringing it until the governor reversed herself and signed an executive order to turn Detroit water on. But there is a trail of broken promises such as the creation of a cabinet-level poverty czar that has created reality of mistrust of this governor. Therefore we must keep the pressure to ensure commitments are honored.”

Given the prevailing health disparities in Detroit and its relation to the need for residents to have access to clean and affordable water, the executive order Whitmer just issued should have been her first response to the pandemic in the city. But that would be asking too much of a governor who did not have the courage in the first place to intervene in the aggressive water shutoffs in the city when she was elected to the office.

Exerting her authority in the largest Democratic base in the state to ensure that Detroiters including those with chronic illnesses have access to water, which the United Nations declared a human right, would mean clashing with Mayor Duggan, a powerful player in Democratic politics in the state who has refused to go along with the UN declaration of water as a human right. Duggan tried to replace Whitmer on the Democratic ticket in 2018, but then changed his mind and backed her.

Regardless of whatever the political considerations may have been for the governor deciding against an earlier executive order to end the callous water shutoffs until Detroit’s dangerous exposure to the coronavirus, it should never outweigh the need for public and elected officials to demonstrate political and moral courage. Leaders in government should show courage and act in the common good to protect the general welfare of the public regardless of any political implications.

The poor and the disadvantaged in Detroit who don’t have access to quality healthcare and have been the victims of water shutoffs needed Whitmer to come to their rescue long before coronavirus started ravaging the city. The governor should have mustered up the courage to follow through with an important campaign promise to guarantee access to water for all Michiganders including Detroit’s underserved population.

“Courage is a decision you make to act in a way that works through your own fear for the greater good as opposed to pure self-interest. Courage means putting at risk your immediate self-interest for what you believe is right,” Derrick Bell, the noted black legal scholar wrote in his book, Ethical Ambition: Living A Life Of Meaning and Worth.

Bell, who was the first black tenured professor at Harvard University Law School, and a pioneer of “critical race theory,” understood how courage remains a rare commodity among many of our politicians, who seem to act in ways that jealously protect their own political interests and ensure their survival, and not in any form that promotes the public interest.

That is why Detroit’s protracted water crisis has largely gone unanswered at the state level in a way that hasn’t granted relief to Detroiters. It is hard to fathom the reality that if Detroit was a majority white city, the intractable issues of inequality that play out in the daily lives of its residents including interruptions to water service would have continued unattended.

“Beyond the ebb and flow of racial progress lies the still viable and widely accepted (though seldom expressed) belief that America is a white country in which blacks, particularly as a group, are not entitled to the concern, resources, or even empathy that would be extended to similarly situated whites,” Bell noted.

Under Mayor Duggan, the first white mayor in 40 years, the issue of poverty has been ignored by an administration that seems more interested in putting more focus on painting a rosy picture of the revitalization of the city, than the longstanding issues of inequities that have now been made prominent by the coronavirus. The so-called comeback of Detroit means nothing if COVID-19 is allowed to continue to kill men and women in a city where deplorable socioeconomic conditions are bound to dictate the kind of care you receive throughout the crisis.

Duggan and Whitmer are now under pressure to contain the virus in Detroit. It remains to be seen if the city will move fast enough to abide with the governor’s executive order to turn on water in occupied homes since the Detroit Water and Sewerage Department actually has been slow to resume water services under a 30-day moratorium that was announced on March 9 for some 3,000 households.

The coronavirus pandemic is going to have a heavy impact on Detroit. The US Surgeon General Jerome Adams already noted that in a CBS interview where he projected the coming week to be worse for the city. Because of the absence of seriously addressing the epidemic of poverty and the failure to develop a very comprehensive anti-poverty agenda at City Hall, many lives now remain at risk.

Detroit lives matter during this crisis. That should be at the back of the minds of both Duggan and Whitmer, two white liberal political chieftains who have a penchant for being reactive than proactive on issues of poverty and inequality.

Given the enormity of the crisis facing Detroit right now, it will require political courage to do what it is necessary to protect the poor and disenfranchised, and to consequently subdue COVID-19.

Time is of the essence.

Bankole Thompson is the editor-in-chief of The PuLSE Institute. He is a twice-a-week opinion columnist at The Detroit News where his column appears on Mondays and Thursdays. He is the host of REDLINE, a news magazine and hard-nosed commentary show on 910AM Super Station-Detroit, which airs Monday through Friday from 11am-1pm EST.