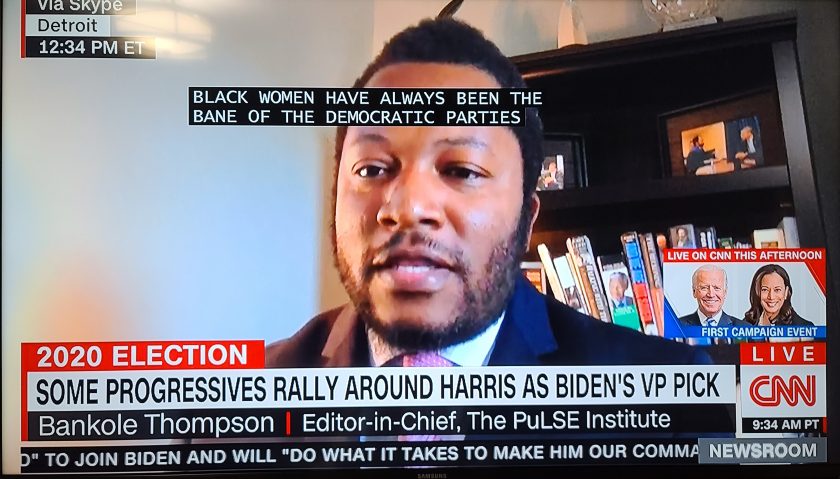 Bankole Thompson, the Executive Dean and Editor-in-Chief of The PuLSE Institute, and a twice-a-week opinion columnist at The Detroit News, was invited by CNN last Wednesday August 12 to participate on a panel discussion, and to respond to the historic selection of U.S. Senator Kamala Harris as the first Black woman to serve as a vice presidential nominee on a major party ticket. Thompson is the host of REDLINE, a daily two-hour urban affairs show on 910AM Super Station-Detroit, which airs from 11am-1pm EST.

Thompson and Angela Rye, former executive director of the Congressional Black Caucus, joined CNN host John King on the Inside Politics program, to explain what the choice of Harris means to the progressive movement in the wake of a new emerging political reality in the nation exemplified by the Black Lives Matter movement.

Before Joe Biden, the Democratic presidential nominee, announced Harris as his choice to be on the ticket on August 11, it was Thompson, a nationally renowned Black journalist who writes a twice-a-week column for The Detroit News, who led the charge from Michigan urging Biden not to choose Gov. Gretchen Whitmer or any white liberal female as a running mate.

Thompson insisted in his searing and widely read August 8 column that Biden should choose a Black woman instead, and that it would be a “politically fatal decision” to choose Whitmer, who was a top contender in the VP search, and who has broken key campaign promises made to Blacks in Michigan during her 2018 gubernatorial campaign. His column came out days after the Associated Press reported that Whitmer had visited Biden at his home in Delaware, making her the only VP contender who is publicly known to have had a face-to-face chat with Biden.

Thompson’s column led to a groundswell of African American public officials in Michigan, a battleground state, who came out vigorously against the possible choice of Whitmer being on the ticket, the day after his column was published. The public outcry against Whitmer possibly becoming the vice presidential nominee was swift as many listeners on Thompson’s daily two-hour radio show REDLINE on 910AM Super Station, a 50,000 watts broadcast, warned Biden that they would not vote for a Biden/Whitmer ticket. The calls for Biden to go with a Black woman exposed to a national audience an underreported and ongoing rift between Whitmer and the Black community in Michigan, especially in places like Detroit, Benton Harbor and Flint.

In fact, during the CNN interview, John King, the host called Thompson’s column a very tough piece, and read portions of the column while displaying it on the screen for CNN viewers to see as the interview began.

After Biden named Harris as his running mate, Sam Riddle, a veteran political analyst and strategist, who was Rev Jesse Jackson’s lead advance man in his groundbreaking 1984 presidential campaign, and also served as state field director for his second run in 1988, when they defeated Michael Dukakis in the Michigan presidential primary, said Thompson exerting journalistic influence in the VP selection must not go unnoticed.

“Bankole Thompson’s journalistic advocacy for a Black Woman to be on the ticket as VP with Joe Biden was heard at the highest level of Dem Party,” Riddle posted on social media after Harris was introduced to the nation.

Days later, Riddle, an honorably discharged Vietnam era veteran, and a graduate of the University of Michigan Law School, who has long contended that Whitmer was in serious play for the VP slot, added, “The nation heard you. That irks hypocritical Michigan Democrats.”

Thompson is an esteemed Black journalist, who writes about presidential politics, public leadership, issues of racial inequality and poverty. Earlier this year, he was the keynote speaker for the 20th Annual Slavery to Freedom Lecture Seriesat Michigan State University. His speech was titled “Black Lamentations: The Redemptive Need for Healing in American Democracy.”

The slavery lecture series has featured previous speakers such as the late civil rights hero and Congressman John Lewis, civil rights leader Harry Belafonte, Dr. Evelyn Higginbotham, chair of the History Department at Harvard University among other notable leaders and scholars of the Black experience. Thompson is the author of a pair of books on former President Barack Obama, following a series of sit-down interviews with him.

Because of Thompson’s journalistic public leadership and being a fierce voice for racial justice in the media, the University of Michigan Bentley Historical Library, which houses the papers of every Michigan governor, and other significant leaders, in 2015 established the “Bankole Thompson Papers,” to document his work for posterity.

At The PuLSE Institute, Thompson, directs the strategic and editorial thrust of the independent anti-poverty think tank. His column at The Detroit News appears on Mondays and Thursdays. His latest Thursday, August 13 column explains why it was significant to push for a Black woman like Harris to be on the Democratic ticket.