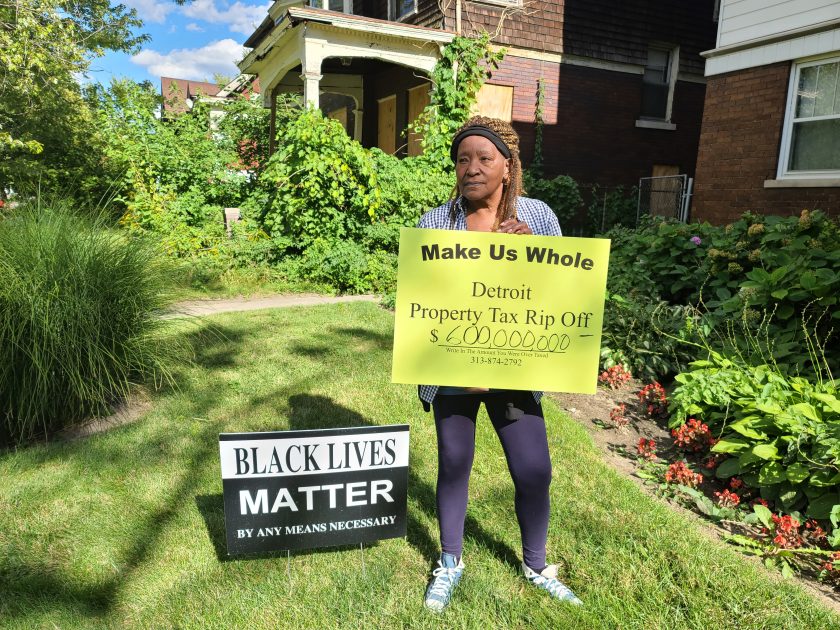 Agnes Hitchcock, the indefatigable leader of Call ‘Em Out Coalition, the noted Black activist group in Detroit, has a knack for publicly shaming elected and appointed public officials in the city. A firebrand activist, Hitchcock, has drawn attention from the highest levels of government with her piercing critiques of the excesses and mismanagement of the public good under various administrations at City Hall.

Her legitimate discontent against the current administration of Mike Duggan, the first white mayor of Detroit in 40 years, could fill up pages of complaints in any court of competent jurisdiction. But the one that stands out the most right now for this fearless Detroiter is the $600 million over-taxation of Detroit homeowners, which the Duggan administration so far has been reluctant to address or compensate its majority Black homeowners who were over-assessed from 2010-2016.

Hitchcock drawing on the tradition of Black women like Fannie Lou Hamer, who spoke out eloquently and courageously against the status quo, is on a mission to protect poor Black homeowners in America’s largest Black city, whom she fears are being systematically driven out of their homes.

She recently spoke to Bankole Thompson, the editor-in-chief of The PuLSE Institute about what drives her sense of urgency in an unrelenting crusade to demand that Mayor Duggan makes Detroit homeowners whole, while urging a ‘no’ vote on Proposal N, the questionable $250 million blight bond proposal on the November ballot that Duggan is pushing. She says a defeat of Proposal N would mark a significant victory for Detroiters left out in the economic recovery.

PULSE: You’ve indicated that your mother passed away when you were eight-years-old and that has had a profound impact on you. How has this loss influenced your activism and advocating for a progressive agenda for your community?

AGNES HITCHCOCK: It became necessary to make decisions and problem solve. Continue with high school education or drop out.

PULSE: Activists like you have been speaking with a moral urgency about inequality in Detroit and demanding accountability from those in political power. How in your view can grassroots advocacy with authentic moral commitment shape the future of Detroit?

AGNES HITCHCOCK: Grassroot advocacy can shape the future of Detroit for our people by resisting unfair practices and policies that are designed to have our community support a better quality of life for others.  We must acknowledge that there are some people whose behavior indicate that Black people do not deserve the same life, liberty and pursuit of happiness as themselves.  There are those who believe white privilege allows them, by any means necessary, to confiscate whatever resources Black people have for their betterment.  We must be steadfast in our determination to rid ourselves of those who are not righteous and just in dealing with our people.  We must be more careful in the selection of our leaders.  We must demand accountability of Black civic leaders and if necessary banish them to the farthest corners of the desert as punishment for betraying the trust of our community.

AGNES HITCHCOCK: Respectable politics only serves to keep the Black community serving the interest of the white power system.  You can only create awareness by being heard and seen.  A white power system cannot operate when it is met with determined resistance and light.

PULSE: Detroit is a predominantly Black city, yet still experiencing the weight of inequality in the face of a Black civic leadership that hasn’t demanded redress for the $600 million over-taxation of Detroit homeowners. What is the reason behind this inaction and what does it say about the future of leadership in the city?

PULSE: The administration of Detroit Mayor Mike Duggan seems to have walked away from the issue of addressing the $600 million over-taxation scandal. Why do you think that’s the case?

AGNES HITCHCOCK: Mike Duggan has walked away from this issue because the so-called Black civic leaders have given him a pass in what they think is their own best interest.  Silence is consent.  Detroit’s clergy has turned its back on the very people who have lifted them up to demonstrate to him how much pain they can help to inflict on our community in their self-interest. Some Detroit’s Black political operatives are seeking contracts from the Duggan administration to enrich themselves at the expense of sacrificing the very people who put them into position.  Detroit’s professional class has largely  abandon the people so it is up to the people to rise up and defend themselves and take back what is ours.

PULSE: You’ve insisted on keeping this issue at the forefront of the economic recovery conversation. How important is it to keep this issue alive when it seems most of the media has walked away from it?

AGNES HITCHCOCK:  The media serves the interest of the white power structure.  My intent is to keep this before our people to give us hope that we can make our demands taken seriously. The media operates by two sets of rules. One for Black elected officials and another for whites. An example is how the media was quick and diligent in the pursuit of former mayor Kwame Kilpatrick until he was indicted and convicted for corruption. Mike Duggan and his administration rarely get the scrutiny heaped on prior Black administrations.  He is allowed conflict of interest passes such as the preferential treatment his administration gave to the Make Your Date program under its director Dr. Sonia Hassan and how the city directed more than $358, 000 in federal grants to the program, reports about bid rigging in the administration, Black contractors losing out on opportunity, cronyism passes, residency passes, shoddy accounting passes in the Detroit Land Bank Authority.  This kind of behavior would have been the lead story for days with no end if the current mayor of Detroit was Black.

AGNES HITCHCOCK:  This situation we are in has and will set our community back for generations.  Homeownership is the foundation of our community’s wealth, which is the major avenue for starting to build wealth in our community.

AGNES HITCHCOCK: selling a home seized from a Black homeowner for (unpaid) taxes and selling that home to a white person for 25% of its value and then providing restoration funds to the new white owner has the intended impact of Black removal.

PULSE: Aside from the urgency to resolve the $600 million over-taxation of homeowners, questions have been raised about the use of federal dollars in the city’s demolition process as well as a recent audit of the Detroit Land Bank Authority that slammed the inaccuracy of its accounting practices and its process of awarding contracts. Given these considerable failures of a public authority charged with managing and protecting land in the city, do you think the DLBA should be dissolved?

PULSE: Despite the city’s poor stewardship of the demolition process, the Duggan administration is pushing for ballot Proposal N, a $250 million blight bond proposal, which is a modified version of the proposal that was previously rejected last year by the Detroit City Council after a strong public outcry. Now on the November ballot, and given the troubles of the Detroit Land Bank Authority, what do you think is at stake if Proposal N passes?

AGNES HITCHCOCK: Further decline of Black homeownership in Detroit causes loss of political power, loss of self-empowerment opportunity with our own tax dollars leaving our people at the mercy of those who do not value us.

PULSE: Now that Proposal N is on the ballot with the support from the mayor’s office, what can Detroiters who oppose this proposal do to prevent it from passing?

PULSE: Are you concerned that labor in this town has been silent about the $600 million over-taxation of homeowners by the Duggan administration?

AGNES HITCHCOCK: The union leadership has become just as corrupt as the government officials and they operate with two sets of rules.  With Black city administrations, the unions did not hesitate to strike, protest, demonstrate and shutdown city government. Union leadership muffles the voices of its members to enrich themselves.

PULSE: As a longtime Detroit activist, how important is the issue of the $600 million over-taxation to the future wellbeing of Detroit Black homeowners now and in the future?

AGNES HITCHCOCK: The $600 million over-assessment has been the reason many Detroiters lost their homes.  To make it right and make us whole would give Detroit homeowners the hope that a vote can work for us also.  A win in the defeat of Proposal N would send a message to the white power structure in the City of Detroit that we are a resilient people who will fight for the future of our children.  A win of this magnitude which would stop the forced migration of our people out of the city would put a stake in the ground to show that we do have the power to chart our own destiny. A win in this battle might give our community the will to put people in government to serve the interest of people who elected them to office.