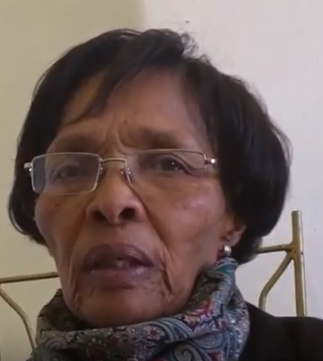 I still have hope

Editor’s Note: Cecilie Palmer helped type the draft of the new South African Constitution that marked the end of the long and brutal reign of apartheid in that nation. She was one of the leading black women activists during the anti-apartheid campaigns, and was jailed in 1976, while pregnant at the height of the Soweto uprising when hundreds of black South African students were massacred. In this special column written for The PuLSE Institute, Palmer reflects on her 38 years in the battle that led to Nelson Mandela becoming president, and how South Africa is evolving with extreme poverty choking the future of its black citizens. For inquiries about submission email info@thepulseinstitute.org

In 1994, celebrations in the streets marked the end of apartheid in South Africa. Nelson Mandela was elected president and his idea of a rainbow nation took root. Women like me who had been imprisoned for having battled against a brutal and tyrannical regime were now ready to roll up our sleeves and help fix things. I was eager for change and fired up then.

I set about typing the first draft of the new constitution and was proud to see its final version ratified. Our government began to dismantle the system of racial oppression and at last, we could see a better future for ourselves and our children.

Twenty-four years on and we now have to admit that the end of racialism could simply not have happened at the stroke of a pen. That the political liberation that many had fought and died for has not translated into the social and economic benefits we had hoped for. In fact, poverty afflicts 55% of the population in South Africa, the most vulnerable of whom are black South Africans, the unemployed, women, and children.

A World Bank report cites South Africa as the most unequal country in the world. This consequently dispels the myth of a rainbow nation and proves that the old systems and structures remain intact. White privilege prevails and millions of black Africans are still waiting for some signs of improvement in their lives. Today, the enduring legacy of apartheid is manifested through the contrast between neighboring wealthy suburbia and informal and squalid settlements.

For its part, the government has shown its commitment to eliminating poverty through the ‘social wage’ which is aimed at improving the lives of the poor and reducing their cost of living. There is also free primary health care; no-fee paying schools; old age and child support grants; housing; and some free basic services to poor households. In its National Development Plan: Vision 2030 (NDP), it recognizes that “no political democracy can survive and flourish if the mass of our people remains in poverty, without land, without tangible prospects for a better life”.

Whilst this must be applauded and gives us hope, there is still much to do, particularly for impoverished communities and those living in shacks.

Far too often, children are electrocuted from the connection of illegal wiring as dwellers steal the electricity they cannot afford to pay for. Young girls fail to go to school when having a period because they cannot afford sanitary pads. Black African women in remote areas with even less access to resources and economic opportunities can hardly afford to feed their families.

Education for our young people must improve. In March 2017, the South African Child Gauge revealed that a staggering 58% of children cannot read fluently and with comprehension at the end of Grade 4. If we continue to have a system that produces young people, already impoverished, without the skills that business and industry need, we will preserve the cycle of poverty. This will add to the already high levels of youth unemployment and reinforce an environment where there is a growing trend for young people to become the victims as well as the perpetrators of crime.

I will not join the minority that believes South Africa would be better off under apartheid. It can well be argued that we have failed to curb racial tensions and to provide employment for those that are most in need of it. We have in many ways failed to improve the lives of millions of people who continue to exist on the margins of society, and also to counter the growing disparities between the rich and the poor.

But I have not come this far to despair and I still have hope.

Hope that one day we will have total integration, where we can show respect for each other, celebrate our different cultures and no longer allow the legacy of apartheid to determine our life chances.

Hope that our ‘born free’ generation can truly be free to pursue their dreams and aspirations and realize their God-given potential.

Hope that we will find new ways to uplift and empower our people, build on their resilience and ability to live their lives in the face of abject poverty and severe hardships.

I still have hope.

Cecilie Palmer, a former anti-apartheid activist in South Africa, was jailed at the Fort Prison, which later became the Women’s Jail at Constitution Hill, while she was pregnant in 1976 at the height of the Soweto uprising. The uprising became a watershed moment in the battle against apartheid when hundreds of black South African students were massacred in broad daylight. Palmer has been involved with the anti-apartheid campaign for 38 years as one of the leading black women defiant voices in the liberation struggle that saw Nelson Mandela become the first black democratically elected president of South Africa. Palmer whose work has been cited in documentaries about the new South Africa remains an elder stateswoman.