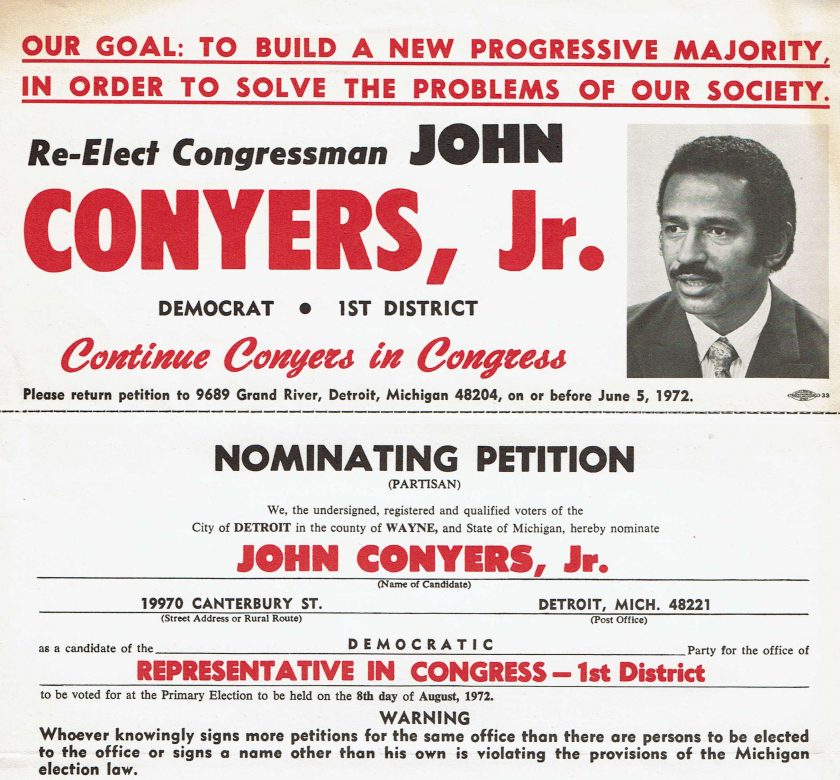 Editor’s Note: Tina M. Patterson, a Detroit native and attorney is the President and Director of Research at The PuLSE Institute, where she brings a strong commitment to social justice, equity and democracy. She was previously a federal government attorney with the Social Security Administration. During her stint at the Social Security Administration, she wrote legally binding decisions for administrative law judges throughout the United States and Puerto Rico. For submission inquiries contact Bankole Thompson, the Editor-Chief of The PuLSE Institute at info@thepulseinstitute.org.

After losing my father six years ago, I had the unfortunate yet unlikely pleasure of sorting through his old paperwork, a common task that offers cleansing and reflection following loss and bereavement. Among the artifacts I found during that time was a 1972 Campaign Flyer for the Reelection of Congressman John Conyers, Jr.

Most remarkably, I discovered that bearing his signature, this dated yet well-preserved literature actually belonged to my grandfather, a black World War II Navy veteran who moved his family to Detroit just six years earlier in 1966, by way of Tuskegee, Alabama.

I was surprised this 40-year old document survived for so long, and instantly enlightened and inspired that so much care had been taken to save and preserve this particular document from one generation to the next. We have all received a litany of political literature, sometimes a never-ending onslaught during election season, and because of this, we are quick to hastily discard of this perceived junk as soon as possible. Yet this particular campaign flyer survived. And it is no coincidence that it was for the reelection of John Conyers. His campaign meant something. He meant something.

For poor and black Detroiters, he was not just a shining beacon of hope in the halls of Congress, but a fierce ally to the plight, advancement, and empowerment of people who had been constantly castigated and ignored by their own society and discriminated against by their own government. Conyers represented not only their long-awaited and sorely needed voice in government, but strong affirmation of their dignity and humanity that had been trampled upon for centuries.

His commitment was evident throughout his 50 plus distinguished years of congressional service, championing legislation in the best interest of blacks and the economically marginalized, including pushing issues unpopular in his time that are now revered and gaining steam.

Conyers famously championed the establishment of Reverend Martin Luther King, Jr.’s birthday as a national holiday, an honor well reserved for the greatest advocate for the poor this nation has ever seen. Today, we unanimously hold the King holiday in the highest esteem, yet Conyers’ introduction of this proposed legislation just days after King’s appalling 1968 assassination was highly unpopular.

In fact, the King holiday legislation lingered in the political doldrums of Congress for 15 years, likely because the honoring of any black person was unheard of and seemingly unfitting in such a prestigious fashion. Conyers could have given up on the proposal each year following the failure to enact the legislation. However, he remained persistent because his commitment outweighed all political heft determined to stop him. And history has vindicated him well.

Furthermore, Conyers consistently pressed the politically poisonous issue of reparations with the introduction of H.R. 40, a bill to study and develop reparation proposals for African Americans. First introduced by Conyers in 1989, the issue of reparations has now gained steam 30 years later amidst the current 2020 election season, possibly as political bait to capture the African American vote. However, Conyers did not cheaply use the issue for the sake of political opportunism. His commitment was genuine and persistent throughout his time in Congress. Even in his final days in office in 2017, Conyers remained steadfast as ever on the issue, stating “Slavery is a blemish on this nation’s history, and until it is formally addressed, our country’s story will remain marked by this blight.” And true to his efforts to push the issue for nearly 30 years, Conyers pronounced quite decisively, “I’m not giving up.”

As evidenced by the King holiday and pushing for reparations, Conyers championed the distribution of equality to the long disenfranchised African American community. Most notably, Conyers cosponsored the Voting Rights Act of 1965 that prohibited voting discrimination, one of a series of landmark legislations produced by the tireless efforts of the brave men and women of the Civil Rights Movement lead by Dr. King and the mother of the Civil Rights Movement, Rosa Parks. In fact, Parks introduced Conyers to Dr. King, who then endorsed Conyers’ candidacy during his original run for Congress in 1964, giving Conyers the exclusive honor of being the only member of Congress King ever blessed with his endorsement.

Conyers, true to his commitment to equality and his loyalty and gratitude to the distinguished and courageous leaders of the movement, recalled the first vote of consequence he took after being sworn in as a freshman Member of the 89th Congress was for the Voting Rights Act. Reflecting on that action 50 years later, Conyers again paid homage to King, remarking “Nearly fifty years ago, Dr. Martin Luther King Jr.’s powerful vision of ‘jobs, justice, and peace’ inspired my first run for Congress and became the cause of my life.” And indeed, it was a cause he did not forsake.

True to this inspiration by King, Conyers followed in the footsteps of King’s short-lived but nonetheless crucial Poor People’s Campaign by cosponsoring and supporting a host of legislation that protected the economic dignity and well-being of the poor. Conyers cosponsored legislation to increase the Earned Income Tax Credit, maintain the SNAP nutrition assistance program, and fully fund Head Start, Job Corps, and the WIC food program. He also voted to support millions of dollars in Section 8 housing vouchers for low income families, and voted against work requirements for welfare recipients.

Committed, consistent, and courageous, Conyers continually fought for the dignity, equality, and humanity of the most marginalized members of society. This is the history we will remember, and the history we must remember.

This is why that 1972 Conyers reelection campaign flyer survived. While we mourn the life of the congressman, we must carry on the ideals he embodied in that 1972 campaign and throughout the half-century of Conyers’ congressional tenure.