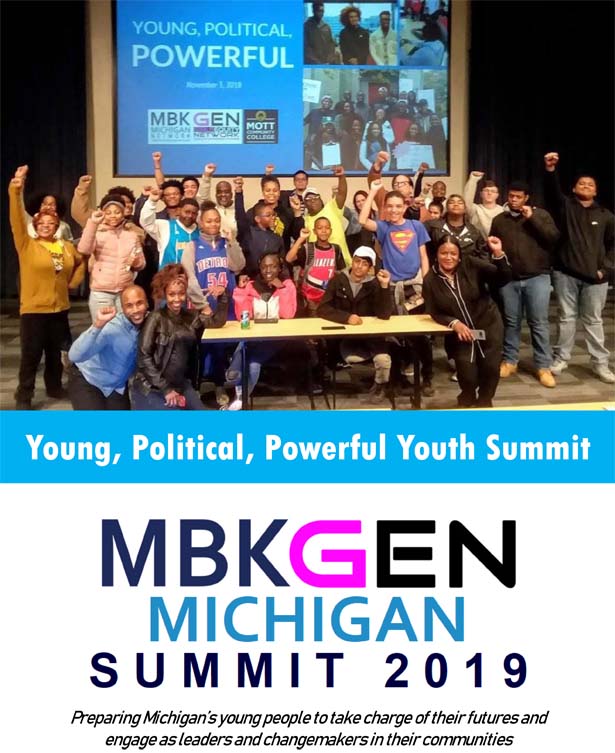 Editor’s Note: Bankole Thompson, the editor-in-chief of The PuLSE Institute today delivered the opening keynote address at the 5th Annual Statewide Youth Political Summit at the Mendel Center in Benton Harbor organized by My Brother’s Keeper/Girls Equity Network and the SHARP Foundation. The day-long summit brought together hundreds of  young people from different parts of the state who converged at Lake Michigan College to learn how to become politically involved in the issues shaping their lives. Below is the speech that Thompson delivered to formally open the Nov. 1 summit.

Thanks for the generous introduction. Good morning to the well-meaning organizers and supporters of this 2019 youth summit. I want to thank Gwen Swanigan and others who put in the effort to bring this summit to Benton Harbor, a city that epitomizes the challenges and issues that young people face today.

I want to speak you this morning about the topic: Courage and Conscience: Lessons for Leadership.

And Conscience according to Webster means the sense or consciousness of the moral goodness or blameworthiness of one’s own conduct, intentions, or character together with a feeling of obligation to do right or be good.

Given these two definitions, it is evident that to be a leader you have to have courage and conscience or both.

It was hip-hop icon and “Poetic Justice” actor Tupac Shakur who recorded “Me Against the World,” to underscore the difficulties of his childhood, which to a large extent mirrors the challenges most African-American youth experience in declining neighborhoods and other places that offer no hope. Sometimes the only activity going on in those environments is the sound of bullets as we’ve seen in Detroit in the last three years, where some young people were maimed and babies found burned in abandoned homes.

In a greater sense, Sha­kur’s lyrics carry some symbolic meaning from a street poet because he talks about being extremely worried about the dangers in his neighborhood. Feeling stressed, he doesn’t want to make excuses, yet his vision is blurred, forcing him to ask the fundamental question, “Will I live? “Because no one in the world loves me.”

In a contextual sense, Shakur’s “Me Against the World” speaks of Benton Harbor proper, Detroit proper and some of the cities you come from this morning that have gone through many trials and tribulations in the past few decades. Cities that in the eyes of some were once a paradise and in the view of others, now represent hell.

As you gather here this morning because you are the leaders of tomorrow, this summit is indeed a great challenge to confront the socioeconomic and political difficulties that sometimes hold progress hostage. It is an affirmation that you must be at the table of political decisions and make your voices heard so you can confront the challenges that forced Tupac to ask a Socratic question in his lyric: Will I Live?

In the last decade, we have seen political movements, and some of us have been a part of those movements where we saw administrations in Detroit, Lansing and Washington change like musical chairs.

On the world stage we have seen governments and regimes forced to recognize the dignity of their people as they demand the cherished ideals of free speech, freedom of the press and other attributes of a democratic and free society born of out of the Magna Carta, and given to us through the Bill of Rights.

We’ve seen children and women most of the time the victims of conflicts that they have no role in shaping or creating cry out on the television screens for the freedoms we hold so dear at home here.

On their faces it is written: “why us? What have we done to deserve this and what will America do about this? What will young people of conscience in America do?

Whether the cries are coming from Syria and other hot spots, the cries get louder every day the conflict continues challenging the wisdom of our leaders to define carefully and to delicately exercise the difficult balance between freedom and security.

And here at home we see how divisive politics has become, how racist politics can be and like a cancer eating the very best of our intentions and taking our sanity to look at the issues constructively regardless of our political identity because when one fails, we all fail.

And when I look at how some of the issues, actions and policies being currently proposed have the potential to erase the legacies of Rev Martin Luther King King Jr., and other gallant soldiers of the Civil Rights Movement, Gwen Swanigan, I could not help but sometimes cross my fingers reflecting in the words of William Shakespeare “Angels and Ministers of Grace Defend Us.”

Right here in Benton Harbor, when our current Democratic governor Gretchen Whitmer tried to do a political end run around the educational system with a singular goal of shutting down the only high school in this smallest and impoverished black city, it represented in the words of Tina M. Patterson of The PuLSE Institute, a “self-imploding educational minefield.”

Governor Whitmer’s action reflected a lack of empathy and deeper commitment to the issue of racial justice. Benton Harbor’s proud history and culture is more than the detrimental actions of a governor. When you decimate the educational institution of any city, you are in fact destroying that city’s future.

Greg Hill, 18, who just graduated from Benton Harbor High School earlier in June and is headed to Lake Michigan College told me in an interview for my Detroit News column: Many of the students who graduated will be going to college. I have about 15 friends I know of who are college-ready now, and will be heading to Grand Valley State University, Oakland State University, Ball State University, Arkansas Baptist College and other schools. The perception of no graduation undermines our high school. This is a deliberate misinformation.”

For Hill, Benton Harbor will always be home. In fact, he plans to pursue studies in education so he could return to teach at the high school he described as a community of “regular people doing regular things with untapped potential and greatness.”

When I visited the home of Damarion Lewis, 16, and Janyia Lewis 15, both of whom attend the high school, they shared pretty much the same thing.

“I like the school because I’m in the band and that makes me feel comfortable because all of my friends go there and we all have a great chemistry together. Closing down the school will separate us from what we want to do in our lives,” Damarion told me.

His younger sister Janyia, who wants to be a veterinarian, said some of her friends have already switched schools.

As youth leaders and activists you must stand up and fight for educational equity. Demand from those who represent you in Lansing, Benton Harbor City Hall, Detroit City Hall to deliver what Dr. King calls “the real promises of democracy.”

Don’t settle for less or take no for answer.

In the midst of all these challenges something has remained: our determination to rise up and break the bonds of stagnation and do everything we can to embrace opportunity and move forward.

That is why I agree with the noble truth embodied in Arthur Miller’s Death of a Salesman where he talks about the difficulties, moral and materialistic challenges of changing with the time.

That as some point we must confront our innermost conflicts that mirror our external conflicts in our search for wholesomeness, in search for the true promises of democracy.

But the Death of a Salesman reminds us that despite the whirlwind of changes facing Detroit, where the economic recovery is so uneven, the suburbs of Birmingham and Bloomfield Hills, the township of Oak Park, the city of Flint, Pontiac, Saginaw, we see what is happening on the horizon. And we say Carpe Diem. Seize the Day.

The customs and mores of the marketplace in our American system justify us in having new vision and being able to articulate that vision to others.

I say to you this morning that you must be the courageous salesmen and women of the future who would argue on behalf of democracy and those who don’t have a voice because they’ve been disenfranchised. You can do what others before you did- including leaders of the Civil Rights Movement, who were in their youth when they started asking tough questions of the status quo.

The great theologian James Cone, in the book, The Cross and Lynching Tree wrote, “Who can doubt that those who suffered in the black freedom movement made America a better place than before?….those blacks among us who lived under Jim Crow know that was no small achievement.”

So in essence, as young people, you will have your own crosses to bear but you must not give up. Remain upbeat and optimistic.