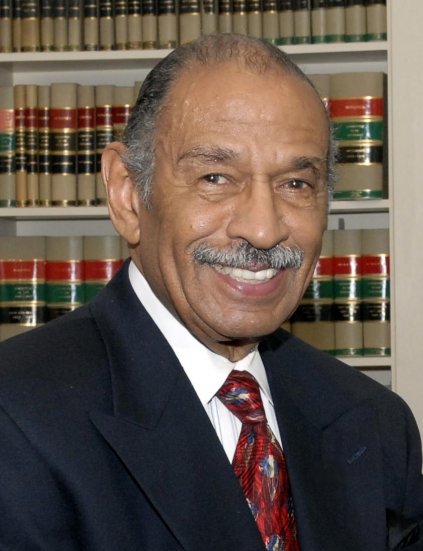 A Vignette of Memories Funny, Happy, and Sad

John Conyers Jr., (D-Detroit) was the most consistent, rational voice for practical progressivism in America. With his low key and steady tone, he always tried to move the bar of logic and accomplishment as far as he could and still win. He pushed and pushed and pushed for the poor and the oppressed.  Here is a vignette of some memories.

* He always pressed for jobs and full employment. He led weekly meetings in his office strategizing how to fund training, employment, and jobs and infrastructure expansion to get under 5% unemployment. One major accomplishment was that the Federal Reserve Bank (“The Fed”) was always forgetting they have two proscribed missions in their charter, keep inflation (and interest rates) low AND create jobs. Conyers uniquely among other members wrote a major letter reminder to the Fed about this second part of their mission and the liberal Fed Chairs since have been paying attention to it. It has made a big difference. During his second to last congressional campaign, he invited me to follow him around in the closing days. Meeting after meeting, radio and television interview one after another, he emphasized  “Jobs” as his mission and cause. That’s one big reason he regularly won big in his races.

* He took great pride in being the son of a labor father. He also loved and worked closely with the religious community throughout Detroit in their joint missions to help the  oppressed and needy.

* Congressman Conyers was about to have a hearing on “discrimination in prisons” suggested by the Republicans and the staff had done a write-up on their issues of a big fisherman company guy put in jail for making too much money, and professional biker, a NASCAR racer, and other business people. Conyers asked the staff, “What about the African American victims of the drug war with crack-vs-powder at 10-1 penalties, and disproportionate arrests and death penalties.?” He totally changed the theme of the hearing and the witnesses said he was “exactly right.”

* When then U.S. Senator Barack Obama was about to announce and former Secretary of State Hillary Clinton was far in the lead, I walked into his office and said, “You know Hillary will win.” Congressman Conyers said to me, “How do I not support the person who could be the first African American President?” Conyers became the first member of Congress to endorse Obama, and my political wisdom was shown for what it was.

* After former U.S. Attorney General Janet Reno sent DOJ police into the WACO compound to try to rescue the kids but the crazy leader got everybody to agree to burn the place down and kill everyone, the Committee called her to testify. Conyers was Chair of Government Operations at the time but the second ranking on Judiciary then. The Government Operations Chief of Staff did not want to alert the Congressman that AG Reno had arrived for fear of what the congressman would say. There were 20 TV cameras there — everyone — and I as press person knew it was my obligation to tell him and to urge him to come. I went to the office to tell him and he said, “Of course I must go.” He proceeded to tell the Attorney General, on camera — I remember as though it was yesterday– “Madam Attorney General, You did exactly the right thing by offering to resign.” I went back to my office and hid under my desk but John Conyers, ever the astute leader, called her up and arranged a bonding meeting the next morning and all was well.

* Conyers as Judiciary Committee Democratic Leader had to corral Democrats in support of Clinton when the vote was about to happen in his committee to send the impeachment articles to the House. The Republicans had the majority and the votes, My wife and I walked into his office before the vote and the lights were off, while Conyers had somber jazz music playing. That was the sad mood he wanted to amplify before he walked down to the committee room, with my wife and me in tow.

* On the anniversary of former President Richard Nixon’s resignation under the assuredness of an impeachment and conviction, Congressman Conyers was interviewed on major morning TV as someone who was there and on the Judiciary Committee. When asked about Nixon’s positive legacy for this and that, Conyers replied, referring to the coverup during Watergate, “Aside from that Mrs. Lincoln, how was the play?”

* During the Obamacare- Affordable Care Act vote- since it was close-close-close, Congresswoman Conyers brought all the members of the Congressional Black Caucus, one by one, into his office. I witnessed several of the meetings and many CBC members were saying, “But it doesn’t go far enough, I’ll vote No.” Conyers had credibility as the author of Medicare-for-All and said, “We have to take this step or we’ll never get there, and the Medicaid expansion plus benefits expansion to pre-existing conditions, youth covered to 26, and drugs for seniors is huge. There is no way we can pass this up.” He got at least half of the CBC to vote yes and the bill passed by one vote. He was a practical progressive, maximizing the possible but working toward the ultimate dream.

The great muckraking journalist Jack Anderson approached us once and said, “We’re doing a story on Conyers not investigating corruption because of his contributions.” We told him, “That’s a false story, and it’s also the last time you’ll hear from us. Or you can write about what he is indeed investigating regardless of who’s President, about weapons system and government malfunctions, fraud and abuse, and you’ll have a lot of good stories.” Anderson and co-writer Michael Binstock took the deal and wrote at least a dozen individual stories. Then, in a surprise to us all, he wrote a summary story, ‘John Conyers – Persistence And Power.’ He got it right.

Conyers said to us at the event:

* Among his many achievements, he was “most proud” of his Martin Luther King Birthday Holiday bill becoming law. He was asked, “Did you think it would grow into this big an event, a national day of service?” He responded, “Yes. At first there was a small group of people with me. A larger group said it “would never happen. Then other people joined. More introduced their own. Support grew. After the assassination, what he had done resounded with people.” Conyers mentioned he felt the “most association” with King among American leaders, marched with him, went to his home, was endorsed by him for Congress.

* He was happy his reparations bill has become a major issue in the presidential campaign. Congresswoman Brenda Lawrence told him at the event, “It’s the talk of the country.” Conyers said, “It’s getting traction because it makes sense.” He joked, “Most of my stuff makes sense but it doesn’t always help it right away.”

* How do you stop voter suppression? “It’s a never-ending activity. With all the people that don’t support minority rights, we always have to stay at it, maintain enthusiasm, and raise money to do it.”

* On the Medicare-for-All movement where he enlisted a majority of House Democrats, but now weakening a bit under political arguments and industry lobbying since he’s left? Conyers said, “I still feel good about it, it’s moving, it takes time.”

* His resolution that passed in the House for no Iran war without congressional approval is “relevant especially now.”

* He noted that “the first person I hired when I was elected was Rosa Parks.”

* At the May party, he said his health was good: “There’s not a thing wrong with me, no complaints.” He said he stayed “active with events, there are so many who invite and welcome me. I’m privileged.” He said he’s been with many groups “from the beginning.”

* He offered positive words about his successors, Congresswoman Talib in Detroit and, at the Judiciary Committee in Washington, Jerrold Nadler (D-NY). Talib presented Conyers with a flower bouquet. He said that despite some criticism of her rhetoric, people need to know she “means well.” He said that Nadler is carrying a “good program, well organized” on constitutional issues concerning Trump. Top Judiciary Counsel Perry Applebaum came from Washington with a resolution congratulating Conyers signed by all Democratic Judiciary congressional members. Also at the party were former office Chief of Staff Ray Plowden and former Judiciary counsel Julian Epstein (and spokesman Bob Weiner, author of this article).

* Congresswoman Dingell was seen crying at the event and was asked why. Perhaps summarizing the feelings of many, she said, “I’m just missing him. Lots of great memories of the ups and downs of life.”