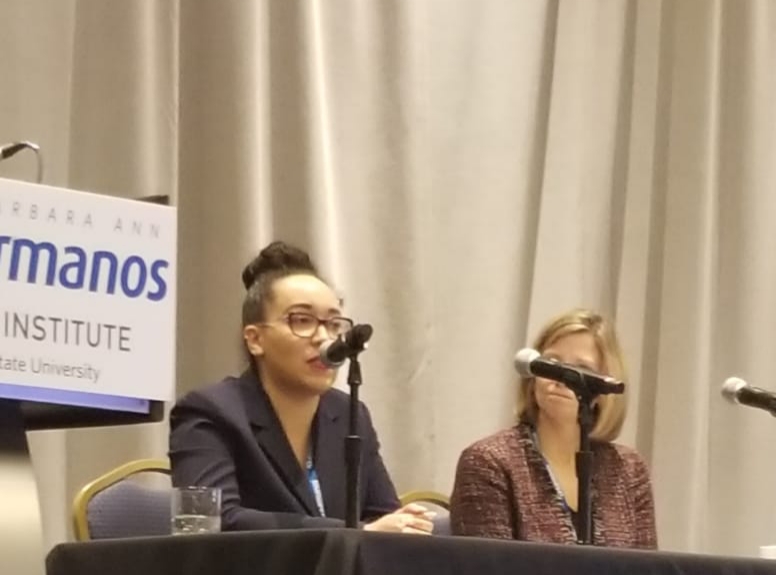 Editor’s Note: Tina M. Patterson, a Detroit native and attorney is the President and Director of Research at The PuLSE Institute, where she brings a strong commitment to social justice, equity and democracy. She was previously a federal government attorney with the Social Security Administration. During her stint at the Social Security Administration, she wrote legally binding decisions for administrative law judges throughout the United States and Puerto Rico. For submission inquiries contact Bankole Thompson, the Editor-Chief of The PuLSE Institute at info@thepulseinstitute.org

The audience of professional women, mainly doctors and researchers, asked poignant questions about how they can assert themselves firmly and effectively to better position their careers. They gave personal anecdotes of their treatment as women that men would not be subjected to. My overarching response to these concerns was to know who you are and not to let anyone tell you any differently. No one knows you better than yourself, so do not allow anyone else to define you, and assert your merits and intelligence decisively because you earned it. I explained that I did not spend years of study and practice to become an attorney or run a major think tank so I could succumb to societal standards that tell me I am not as good as a man because I am a woman.

I stated that this notion applied doubly for being a black woman, especially since black lawyers only comprise 4% of all lawyers nationwide. In my career, I have seen the double standard and the lies of perceived “superior competence” firsthand. As an example, I told the audience of a brief submitted by a white male attorney that I described as “pedestrian,” because it was so subpar that it should not have gone as far as it has in the court system.

The courage to believe in yourself, affirm self- assurance, and assert confidence are some of the hardest things we can do, but are necessary to move forward with conviction in what we do in life. Additionally, with these qualities, we must not be afraid to do what we feel we are called to do. I told the audience that while becoming a lawyer was always my goal, I had no idea that one day I would be running The PuLSE Institute. However, the need was so great that it not only felt like it had to be done, but that it was the right thing to do.

The need was too great to ignore because the pervasive poverty in Detroit was too great to ignore, despite media reports too often uplifting the glitz and glamour of Detroit’s alleged great recovery. Yet my intuition and choice to follow this calling has proven correct, as before I even took the stage, I had audience members come up to me to ask me about The PuLSE Institute.

And even though the event was held in downtown Detroit at the Marriott Hotel, I did not neglect to state the obvious about the current affairs of inequality in the city. I explained that The PuLSE Institute was founded because of the needs and attention of city residents suffering in poverty amidst the joy of development happening downtown. I told the medical crowd about the city of Detroit retirees who lost their pensions in the aftermath of the bankruptcy, and are now subjected to thousands of dollars in deductibles, effectively forgoing health care needs because they simply can’t afford it. The consequences and rippling effects of poverty are real, so the solutions cannot be disingenuous and the message cannot be distorted, regardless of the environment.

Fellow panelists shared similar sentiments about the need to leverage leadership status to improve others’ stations in life. Cynthia J. Pasky, CEO of Strategic Staffing Solutions and a member of The PuLSE Institute’s Business Leaders Against Poverty, shared in an earlier lecture her rise from an impoverished background and how giving back to community is a core pillar of her company’s structure. She also shared that her proudest moment in nearly 30 years of business is that the company has never missed a payroll, prioritizing the financial security of her employees. She explained that many corporate leaders often check a box as community engagement, but cannot concretely explain just what their contribution has done or how it has positively affected someone’s life, highlighting the need for genuine community commitment as a corporate leader.

Additionally, as an example of how closely poverty is intertwined with the professional class, several attendees affiliated with Karmanos told me that the clients they serve rely primarily on Medicaid and Medicare for health care and that income is the largest predictor in how long cancer patients can survive.

The event was an important discussion about the inequalities of life- gender inequality and socioeconomic inequality. But rather than roll around in the sorrows of unfairness, we shared our experiences about how to move past the barriers to rise toward opportunity to better ourselves and our communities.

As women, especially as professionals who have greater access to resources, we have the obligation to uplift those in vulnerable positions, especially other women and minority groups, because we know firsthand how real and devastating the inequitable disparities are. The same applies to helping those in poverty. Too often, it literally determines who lives and who dies. This is an inequity humanity cannot stand for, so our future demands that we must assert ourselves with confidence and courage to change humanity for the better.