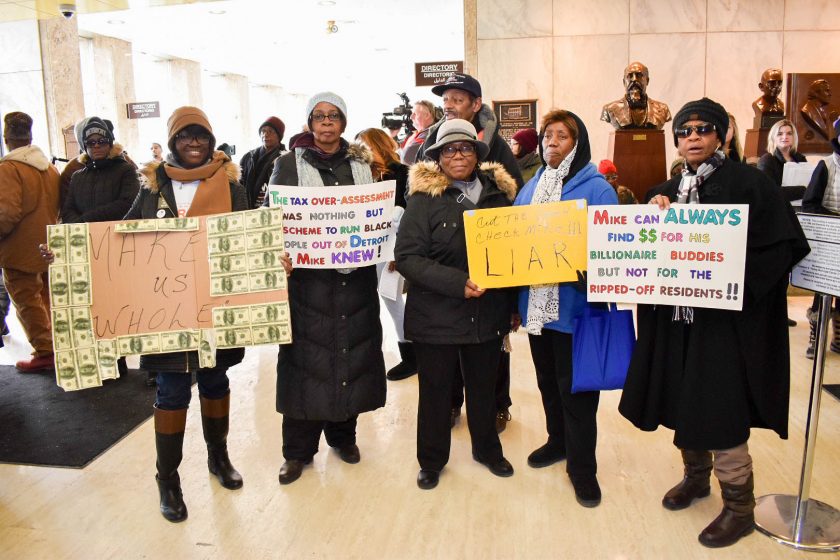 I drove from East Lansing to downtown Detroit Friday morning to witness a historic demonstration inside City Hall against the $600 million over-taxation of homeowners and the ongoing economic revitalization that has left many Detroiters behind. The protest organized by the “Call ‘Em Out Coalition,” and its leader Agnes Hitchcock, is the first serious public expression of legitimate discontent recently against the leadership of Mike Duggan, the city’s first white mayor in 40 years, who refused to address the over-taxation crisis in his Feb. 25 State of the City address.

But the day before a protest that forced Detroit police to shut down the Coleman A. Young Municipal Building, which houses both the offices of the mayor and members of the Detroit City Council, I delivered the keynote address for the “20th Dr. William G. Anderson Slavery to Freedom: An American Odyssey Lecture Series,” at Michigan State University, where I discussed at length the uneven recovery of Detroit.

“Freedom and equality for black people in America in 2020, cannot be discussed outside of Detroit, the largest black city which is currently going through an economic reconstruction. The recovery which has been heralded in national reviews as an American rebirth, is taking place at the expense of its majority black residents who contributed more to the socioeconomic and cultural fabric of the city than they are now receiving,” I told the audience at Michigan State University. “Just like in slavery, when blacks toiled the fields to build the white man’s wealth, longtime black residents of Detroit that have kept the city afloat are now being sidelined from the benefits of the economic recovery that favor their white counterparts, who enjoy more employment opportunities and more access to local and federal contracting opportunities in the downtown and Midtown areas. I have repeatedly called these areas of concentrated wealth islands of opulence that are thriving at the expense of the blood and sweat of black people who gave all to their beloved city.”

This reality was what protesters sought to convey during the Feb. 28 demonstration and they were made up of frustrated Detroiters – young and old- including many who are living on the margins, and have been dismissed in this revitalization. They want their voices heard in this recovery. They are tired of being told to be patient and wait someday for an inclusive recovery, while officials at City Hall offer hundreds of millions in tax breaks to major downtown corporations. They know that the recovery favors more white businesses than black entrepreneurs because studies have shown that. And the $600 million overassessment of their homes from 2010-2016 that was revealed in a Detroit News investigation, only confirms their longtime misgivings and suspicions about the so-called comeback of the city taking place under Duggan.

Even as the local media was largely a no-show at the Friday demonstration except for WDIV-Local 4 and The Detroit News, what we witnessed was a deep cry from fed up Detroiters who have long being ignored in the Duggan era. Because they are so far removed from the glitter of downtown, they offer no attraction to a media, which has shown itself to be at the beck and call of the powerful.

So, when a demonstration takes place in the political hall of power against $600 million of black wealth taken away from homeowners in the city makes no BREAKING NEWS, it is not because they shouldn’t by all genuine journalistic standards, but because they have to do with the commoners, the perennial underclass of the city. Since the discovery of the over-taxation problem, very few media outlets have actually provided an in-depth coverage of the issue.

In fact, many Detroiters have called into my daily radio show REDLINE on 910AM Super Station to posit that the absence of an incessant media coverage about the crisis, is simply an attempt to protect Detroit’s white mayor from further embarrassment. They believe that if Duggan was black, it would have been all hands on deck for both the television networks and the print media.

Another issue why this economic scandal is being downplayed in the press is because of a persistent class warfare going on in a city that is one of the largest poverty centers in the nation. Poverty is not sensational and does not propel ratings. It does not bring impressive advert dollars to media owners. But poverty remains the single most important issue facing the recovery of Detroit, and it challenges our conscience as human beings.

The various layers of Detroit’s government bureaucracy should exist not just to provide security for the generality of the people, but also to improve their living conditions and deal truthfully with them at all times.

Still Mayor Duggan has refused to be forthcoming with any concrete resolution on the overassessment scandal. He hasn’t offered anything substantive that represents making homeowners who felt robbed by being over-taxed financially whole. Instead, Duggan and his minions have adopted a dubious new talking point as a defense mechanism to stave off public pressure: the money has been spent.

The mayor, who is a trained lawyer seems to have forgotten that democracy is also about guarding minority rights and protecting the most vulnerable in our communities. That means he should work to fully compensate Detroiters who were financially disadvantaged by the over-assessment including those who consequently lost their homes in the process during the foreclosure crisis.

But there’s been no real attempt to understand the destitution and the levels of inequality of those who are left behind in this recovery including the victims of the overassessment. In fact, what we’ve seen in the last couple of weeks are ridiculous attempts to blackmail poor Detroiters as either failing to appeal the overassessment when it first began.

The demonstration on Friday was a visible reminder of the urgent need for Duggan to be responsive to the cost of economic inequality in the city that is now exemplified by the latest over-taxation scandal. Massive investment in the reduction of poverty in Detroit should be the hallmark of the recovery, and it begins with the mayor and his administration outlining a plan to address the fiasco that launched the City Hall protest.

Bankole Thompson is the editor-in-chief of The PuLSE Institute, Detroit’s independent and non-partisan anti-poverty think tank. He is a twice-a-week opinion columnist at The Detroit News where his column appears on Mondays and Thursdays. He is the host of REDLINE, a news magazine and hard-nosed commentary show on 910AM Super Station-Detroit, which airs Monday through Friday from 11am-1pm EST.