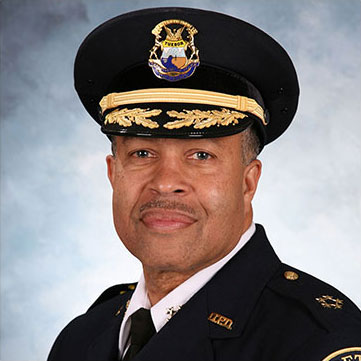 Editor’s Note: Tina M. Patterson, a Detroit native and attorney is the president and director of research at The PuLSE Institute, Detroit’s independent anti-poverty think tank. She was previously a federal government attorney with the Social Security Administration. During her stint at the Social Security Administration, she wrote legally binding decisions for administrative law judges throughout the United States and Puerto Rico. This column, part of The Douglass Project, the Institute’s research vessel addressing issues of race, equity, democracy and poverty, is an ongoing series that explores the role of race and policing in Detroit. For submission inquiries contact Bankole Thompson, the editor-in-chief of The PuLSE Institute at info@thepulseinstitute.org.

“There is a depth of hatred in the bone marrow of this country that supports the killing of the Black body.” -Arica L. Coleman, Ph.D.,Historian, Author, Lecturer

No crime in the state of Michigan is punishable by death. In fact, Michigan became the first government in the English-speaking world to outlaw capital punishment for murder and lesser crimes just 10 years after its statehood in 1847, and it is the only state in the Union whose constitution bans the death penalty.

Another well-established principle of constitutional law and criminal justice is the universal fundamental right that a suspect is innocent until proven guilty. In fact, the entire American criminal procedure begins with this sacred presumption. If every suspect was guilty upon first encounter with police, there would be no need for prosecutors, judges, juries, or anyone else employed by our publicly-funded court systems.

The notion that innocence must be protected at all costs is a centuries old axiom. In 1769, preeminent English jurist William Blackstone noted that “the law holds that it is better that 10 guilty persons escape, than that 1 innocent suffer.” Likewise, this fundamental principle has been recognized by the 1895 U.S. Supreme Court case of Coffin et al. v United States, which stated, “it is better to let the crime of a guilty person go unpunished than to condemn the innocent.”

These same constitutional provisions extend to newly freed Black people in the aftermath of the Civil War and the abolition of slavery with the passage of the 14th amendment, which guarantees no state shall “deprive any person of life, liberty, or property, without due process of law; nor deny to any person within its jurisdiction the equal protection of the laws.”

Yet the shooting death of the 19-year old young Black man, Hakim Littleton, in Detroit on July 10, 2020, and the justification for his death at the hands of the Detroit Police Department, seem to nullify these well-established constitutional liberties, that harken to the days of slavery and Jim Crow policy: “No crime in the state of Michigan is punishable by death… unless you’re Black.” “Innocent until proven guilty… unless you’re Black.” “Due process of law… unless you’re Black.”

This is particularly troubling considering the interaction between white suspects and police response to their violent behavior, which is often noticeably less apprehensive than that of black suspects. Most egregiously, mass murderer and white supremacist, Dylann Roof, was taken into custody without incident by authorities after he murdered 9 Black members of a historically black church, “Mother” Emanuel African Methodist Episcopal Church, in Charleston, South Carolina, including its senior pastor Reverend Clementa C. Pinckney, who was also a sitting state senator at the time of his murder. Infamously, the police purchased Burger King for Roof, who was allegedly hungry after committing such heinous crimes, an act that validated his humanity despite his cold-blooded and intentional execution of Black life.

Data proves that blacks are disproportionately more likely to be killed by law enforcement than whites. Additionally, reports have shown that whites who commit violent action against police officers can still be taken in peacefully, which further calls into question the so-called justification for the police shooting that occurred in Detroit on Friday.

Take for instance, the case of Benjamin Murdy in Harford County, Maryland, in January 2020. The Harford County Sheriff, Jeffrey Gahler, stated that during an hour-and-a-half long standoff, Murdy fired almost 200 rounds from a rifle and handgun, while “police never fired a single shot.” The suspect then arranged for his own surrender, and was taken into custody… alive, and guaranteed his day in court. Guaranteed his right to due process and equal protection under the law. How can this extremely and knowingly violent white man fire 200 rounds at police, with multiple weapons, and still be taken into custody alive, without the police firing even one single shot?

In contrast, Hakim Littleton was killed on the spot, while police were praised for their actions in taking his life. He was robbed of his right to due process, robbed of his day in court, robbed of any other days on Earth, and it was immediately and resoundingly deemed justified.

With the climate of protest against police violence permeating the globe since the murder of George Floyd by Minneapolis police on May 25, Detroit Police Chief James Craig took quick and decisive action to release police video of the encounter with Mr. Littleton. Whether done for transparency or reprieve from culpability, the video showed that Mr. Littleton had a gun and fired at least one shot, close range, at an officer first, before officers returned fire, killing him.

Mr. Littleton’s actions were inexcusable, and police most certainly had probable cause to detain him. In fact, he could have been taken into custody after video showed him restrained on the ground. He could have faced a myriad of charges, including serious felonies such as assault with intent to murder, assault against an officer, aggravated assault, assault with a deadly weapon, and felony firearm, just to name a few.

But in this country, Blackness is a nonexistent crime which renders you immediately guilty of any actions, whether legal or illegal. There is no presumption of innocence that carries through until conviction. Guaranteed constitutional rights are null and void, and imminent and violent death by police becomes a proper and acceptable punishment, regardless of the actions that lead to the encounter.

If Littleton was white, the burning question is would he be dead? Given the contrasting case of Murdy and the fact that blacks are more often killed by police than whites, there is a strong possibility that if Hakim Littleton was white, he would still be alive. In fact, there are other cases of white violent suspects who were peacefully taken away unharmed in their dealings with police officers.

This is the analysis mainstream media will ignore in Detroit. They reported on the Friday shooting without any context into the documented racial disparities of law enforcement shootings between white suspects and Black suspects. Instead, the media immediately reported information released by police and validated the shooting with headline titles such as “Detroit police chief: Video shows killing of man by officers was justified shooting.”

However, every police encounter with Black people in America deserves intense scrutiny beyond the headlines due to the relentless, historical pursuit of state-sanctioned and state-sponsored violence against Blacks in this country.

In a National Geographic article summarizing the history of lynching in America, Arica Coleman, Ph.D., pointed out the dehumanization of Blacks is the link that justifies death in such violent manners. “It doesn’t make a difference what you do… your very presence signifies a threat because of the meanings associated with Blackness- dangerous, impurity, inhumanity, criminal.”

There is a sinister, underlying belief that Black people are always in the wrong, no matter how innocent or culpable their actions, and their behavior necessitates swift and immediate punitive action, while the police can be excused from liability with murder. Gun or no gun, this is why police can justify the killing of Littleton in Detroit, while Murdy, who posed an arguably more significant threat, can be taken into custody unharmed. This is why Ahmaud Arbery’s killers can walk freely for two months without controversy. It’s why Breonna Taylor’s killers have not been charged, with some still on the force. This is why grand juries declined to indict the killers of Michael Brown in Ferguson, Missouri and 12-year-old Tamir Rice in Cleveland. And, it’s why defenders of George Floyd’s murderers try to use his past criminal record as a justification for his inhumane death.

This belief in inherent Black criminality is what spawned the lynch mob mentality that allowed angry crowds of white citizens to storm county jails detaining Black suspects, drag those suspects from their jail cells, and institute vigilante justice through violent lynchings, often preceded by beating, mutilation, and other heinous torture tactics inflicted upon the victim while still alive.

The National Geographic article documents a lynching that occurred in Duluth, Minnesota in 1920, 100 years before the police murder of George Floyd in Minneapolis, in which police were “ordered not to use their guns” to deter a white mob of up to 10,000, who came to enforce vigilante justice on six Black men.

As the article noted, these Black men, along with numerous other Black victims, whether suspected of a crime or innocuously passing by, were “killed without due process, never charged with a crime, never offered an opportunity to mount a defense against allegations.” Like George Floyd. Like Breonna Taylor. Like Ahmaud Arbery. Like Rayshard Brooks. And now, like Hakim Littleton.

There are no “perfect” victims. All of these individuals shared the same attributes of being Black, the common denominator that subjected them to extrajudicial killing by police and vigilante citizens alike.

As Dr. Coleman stated, “There is a depth of hatred in the bone marrow of this country that supports the killing of the black body.”

The rush to condemn Mr. Littleton as a menace to society backed by a dehumanizing narrative being weaponized by the media, betrays the inherent natural respect for humanity and fundamental rights that are accorded to white men, who may have a similar or worse background than him.

Until we tackle this highly uncomfortable but very existent dichotomy in this country, the killing of Hakim Littleton cannot be accepted as justified.