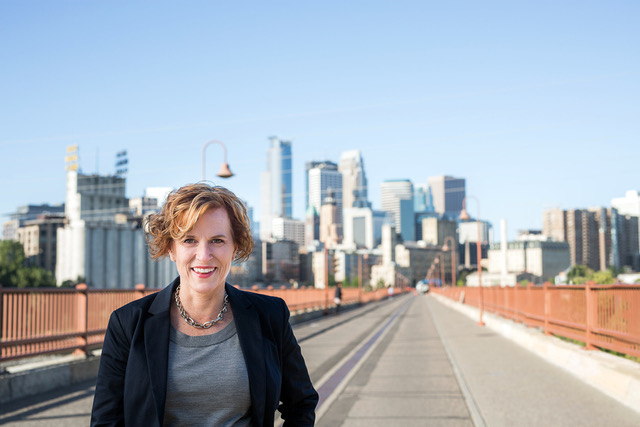 The brutal death of George Floyd under the knee of a white Minneapolis police officer has placed the searchlight on the City of Minneapolis as the national push to end police brutality continues.

But the cries for criminal justice reform have also put white liberal politicians under the racial justice microscope. Some of the major cities where the battle for police reform is playing out are Democratically-controlled cities including Minneapolis and Detroit.

The cry for real reform from inside the white liberal establishment so far is coming from very few voices. Prominent among them is Betsy A. Hodges, who served as the 47th mayor of Minneapolis from 2014-2018. On a mission to tell her fellow white Democrats to seriously and finally take the cause of racial justice and confront police brutality in their cities, Hodges tells Bankole Thompson, the editor-in-chief of The PuLSE Institute that white liberals will have to move beyond their whiteness and push for systemic change.

PULSE: The killing of George Floyd by a Minneapolis white officer, and the global reaction to his unwarranted death, has left a lasting stain on the Democratically run city of Minneapolis.  Can Minneapolis now lead the way in meaningful police reform?

BETSY HODGES: Out of deference to the voters and leadership in Minneapolis, I no longer speak for the city. I am encouraged by signs there and in cities across the country that the conditions for meaningful, systemic change seem to be ripening.

PULSE: The Minneapolis City Council voted to disband its police department. The current mayor Jacob Frey was not on board with the idea. Is he an obstacle to reform?

BETSY HODGES: Following the custom of many former mayors regarding their successors, I won’t comment on this time about his policy decisions.

PULSE: Would you have supported disbanding the police department if you were still mayor?

BETSY HODGES: In deference to the voters and leadership in Minneapolis, I will not speculate on policy decisions in Minneapolis. What I do know is that all of us are being invited to see public safety as not simply law enforcement. True public safety addresses all the policies that create systematic differences in crime and the perceptions of crime and criminality, not simply the policies and functioning police departments.

As mayor I supported strategies that allow residents to have a larger say in public safety in their neighborhoods, including the first-of-a-kind Collaborative Public Safety Strategies, where participatory budgeting met local initiatives from top to bottom.

PULSE: You chastised white liberals in a recent New York Times column for their lip service towards police reform. Why did you feel the need to speak out now?

My intention in writing the piece in the New York Times was not chastisement, but to share with other white people both my understanding of how I see our whiteness operating and an invitation to move beyond it. I believe right now there are a lot of white people for whom much has been revealed about American social systems and how they were structured to get the results they are getting. I believe many white people are more open to hearing a message that names it and a call to truly work to change it. I wrote the piece for that moment.

PULSE: Do you think white liberals get the message that they have been an obstacle to serious police reforms that will guarantee the protection of black life?

BETSY HODGES: I believe some white liberals are starting to take a true look at how American systems operate and why (because white people set them up on behalf of white people) and I hope that leads to support for leaders and policies that would truly change those systems to get good outcomes for people of color and indigenous people as well as white people.

PULSE: Your New York Times column surprised me because I have not seen any high profile white liberal politician in America who has publicly confessed that they (white Democrats) have failed the black community when it comes to policing and criminal justice reform. Why is that?

BETSY HODGES: I think there are at least a couple of reasons for that. First, for mayors who see how the systems are operating and work to change it, they often need the support of the same white people who would be defensive and upset if the dynamic were called out.

As mayor, I openly talked to white people about our whiteness, how it operates, and what was in it for Minneapolis’ white people to achieve true racial equity (see, for example, my State of the City speeches and my budget speeches). Even so, and perhaps because of that, I was met with significant resistance from white liberals to almost all the change work I did.

Many like-minded mayors don’t see the point in poking that bear. Second, one of the tricks of whiteness is to socialize white people into occluding from ourselves how whiteness functions.  Many white mayors who share values of equity don’t see how the goal of the system (serving white people well) needs to change, and the policies that support that goal need to change, in order for the outcomes for people of color and indigenous people to change.

PULSE: As you know some of the cities that have witnessed the flame of police brutality played out on the national stage are mostly (if not all) run by prominent white Democratic mayors. What do you think needs to change for white liberal mayors to seriously push for the kind of reform that will protect black life?

BETSY HODGES: One of the reasons I wrote the piece in the New York Times is because I know the barriers mayors face when they work for anti-racist policy changes and the blowback that comes from all sides, including and especially from white people.

PULSE: You served as Mayor of Minneapolis. What would you have done differently if you were still mayor?

BETSY HODGES: In deference to the voters and leadership in Minneapolis, I will not speculate.

PULSE: Are there things that you regret during the time you served both on the city council and subsequently as mayor?

BETSY HODGES: At some point I will address that question, but not today.

PULSE: Because of the failure of the Democratic Party to strongly articulate a vision to end the nightmare of police brutality, many young black activists and their young white allies are increasingly becoming disenchanted with the party. Is the Democratic Party facing an existential threat?

BETSY HODGES: I believe the concept of American Democracy is facing an existential threat, both from the man running the authoritarian playbook from behind the Resolute Desk and the millions who support him, and from heightened awareness, particularly among white people on the left, of the oppression on which the democracy was built.

PULSE: Many young activists I talk to are not enthused about vice president Joe Biden, the Democratic flagbearer, not only because of the 1994 crime bill he authored, and its devastating impact in the black community, but also because they don’t view him as an ally who would come out forcefully against vigilante policing. Are you worried?

BETSY HODGES: I am worried about anything that would contribute to keeping Donald Trump the president, and his policies and authoritarianism in charge of this country.

PULSE: Should ending police brutality become the dominant theme for the Democratic Party heading into the fall election?

BETSY HODGES: I believe creating systems that serve people of color well, and making the case effectively to white voters on the left and middle that there is something in that for them, should be the dominant theme. Policy regarding public safety is the marshal of that parade.