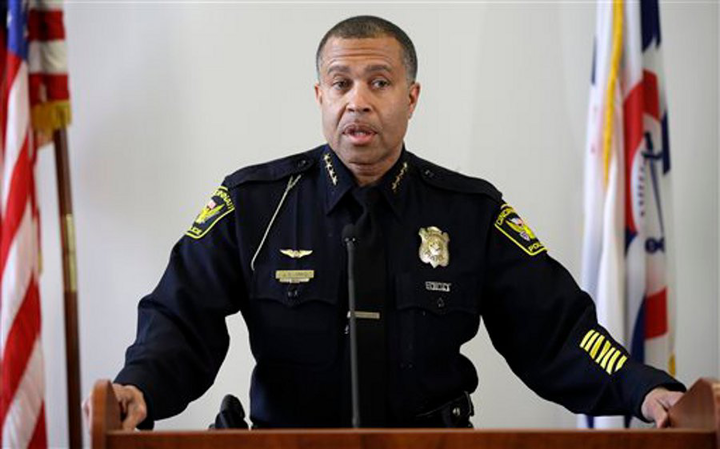 Bankole Thompson is the editor-in-chief of The PuLSE Institute, Detroit’s independent anti-poverty think tank. He is a twice-a-week opinion columnist at The Detroit News, where his column appears on Mondays and Thursdays. He is the host of REDLINE, a two-hour news magazine and commentary radio show on 910AM Super Station-Detroit, which airs Monday through Friday from 11am-1pm EST. He can be reached at info@thepulseinstitute.org

In June of this year, an article in the Washington Post, made the case for why journalists should start reexamining their longtime dependability on police as credible source of news and information. That the media should be meticulous in using police accounts of events as the gospel truth without factually corroborating what they are being told from police headquarters when breaking a story about an incident or arrest.

The need for reporters to exercise independence, professional fact-checking and be thorough in their reporting of policing issues is even more urgent now especially in the era of the Black Lives Matter movement, where the demand for serious police reform is reverberating through nationwide protests since the death of George Floyd.

But the memo for members of the Fourth Estate to stop relying solely on unverified accounts and statements from the police about the impact, direction and meaning of the Black Lives Matter protests, has yet to reach the Detroit media, in light of a vicious propaganda that Detroit Police Chief James Craig, has been engaging in to discredit legitimate protests about police reform in the city.

Chief Craig has been claiming in the media without evidence that there are “trained Marxists,” and anarchists among the protesters whose intention is to create trouble, and “undermine our government as we know it.”

Despite his persistent use of the same kind of language used during the anti-communist Red Scare movement to undermine and publicly discredit civil rights leaders like Rev. Martin Luther King Jr., former Detroit Mayor Coleman A. Young, and other political activists during the Cold War era, the mainstream media in Detroit has failed to report Craig’s actions are simply baseless claims.

Instead, the mainstream media has been treating Craig’s comments about protesters as “Marxists” and “Anarchists,” as statements of fact without prevailing on him to provide supporting evidence. In so doing, the media is enabling Craig to engage in dangerous propaganda, that undermines good governance, and that is inherently destructive to First Amendment right to free speech and protest, one of the cardinal principles of our democracy.

As a member of the working media in Detroit, it is shameful to see Chief Craig’s propaganda go not only unchecked in the press, but treated as if it were the sacrosanct rule of law that cannot be invalidated.  Also ridiculous is the fact that these unsubstantiated claims are being made by a police chief who openly admitted to having 54 untruthful officers on the police force whose testimonies have been ruled inadmissible in any court of competent jurisdiction. Although reassigned, those officers still are on the force and the media has yet to demand any serious investigations into their actions that would lead to their removal from the taxpayer dime.

The fact that the top cop in Detroit, America’s largest Black city, has chosen to use labels that were weaponized against Black activists and their white allies in order to undercut the important work of the Civil Rights Movement, insults the legacy of the gallant men and women who fought hard to challenge Jim Crow policies during the 1950s and 1960s.

Let’s not forget that Detroit played a significant role during the Civil Rights Movement given how Dr. King delivered his first draft of the famous “I Have a Dream,” speech at Cobo Hall. That history alone, should encourage the media to fact-check Craig, and not allow a power-intoxicated chief of police to use the kind of historical and destabilizing language that today stands to sully the sacred memory of those who gave their lives during the Civil Rights Movement.

The Detroit media has woefully failed to provide context to the dangerous relationship between Chief Craig’s comments about Marxists and anarchists, to the price that deputies and other earlier supporters of the Civil Rights Movement paid in their battle against racial injustice. Numerous lives were ruined in the process because they were falsely suspected of being communists.

It is breathtaking that no one in the Detroit mainstream media has been willing to publicly challenge Chief Craig’s false assertions, and to call him out on the carpet for his antics and wild allegations. As I indicated in my September 28 Detroit News column, this city doesn’t need James Craig to be the Joseph McCarthy of Detroit, the former Wisconsin Senator, who led a cruel and vindictive crusade against left-leaning activists in his ardent search for communists.

Chief Craig’s claim that the protests are no longer about race, is not only laughable on its face, but also an attempt to demean the legitimacy of the national outcry in the wake of increasing demand for structural reform in policing in America. Yet again, the media in the largest Black city in the nation, would not demand that Craig show evidence for his dogmatic tirades.

This kind of abdication by the media on basic fact-based journalism, is the reason why many Detroiters don’t seem to trust the mainstream media because it has often demonstrated a penchant for promoting statements from  officials that have no merit as a barometer of  “truth” in stories written about crucial issues in the city including police misconduct.

If Chief Craig cannot be fact-checked on his outrageous allegations about protesters, why should we expect the media to demand answers on other troubling issues within the Detroit Police Department such as the use of the problematic facial recognition technology and other race-related matters?

It makes sense that in an anti-democratic society, the mainstream media would be censored from reporting or verifying the statements of a law enforcement leader like Chief Craig. But ours is a democratic society, and Craig is not vested with absolute powers. His word should not be the rule of law and divergent opinions shouldn’t be automatically regarded as seditious.

After all, the media is supposed to be the pulse reader of democracy, and is only able to perform that role by offering a level playing field for the expression of all socio-political persuasions including members of the Black Lives Matter movement, who seem to be only ones challenging Chief Craig’s narrative, and still demanding better government.

Ironically, the media vociferously and jealously guards its First Amendment rights to freedom of the press as it should. However it should also recognize that right for Black Lives Matter demonstrators as much as it cherishes it for itself. The obligation to adhere to the basic democratic and journalistic principles of fairness could not be more significant because no public official should be deemed unaccountable in the press.

Chief Craig is a major public official who bears the highest burden of securing the public trust in telling the truth. Therefore, the media is obliged to ensure that the public can trust officials like Craig by doing due diligence in investigating the factual nature of their claims.

But there seems to be an insatiable intercourse between the police force and the elite news media, that religiously perpetuates a one-sided narrative on behalf of the political establishment, that shields any critical analysis or counter-arguments of what is desirable to report regarding the actions of the police force.

This lachrymal state of affairs that allows Craig to employ similar tools that were the preferred weapons of choice during the McCarthy era, to wage an information warfare against this incarnation of protesters demanding civil and human rights for Black people who die in police encounters, is an indictment of the mainstream media in Detroit.

It is time for Chief Craig’s propaganda festered by mainstream media hypocrisy to be subject to trial in the communal court of compelling credibility. The media should stop being a pawn on the chessboard of a propaganda that opposes the essence of the historical battles for equal rights.

It is a shame that a Black police chief like James Craig, who is the direct beneficiary of the bloody campaigns for civil rights waged half a century ago by Dr. King and others, would now appear to be using Cold War-era language that sought to prevent Blacks from gaining equality under the law.

That is all the more reason why the unwillingness of the media to hold Chief Craig accountability distorts the most important issues underlying his anti-Black Lives Matter propaganda.

That also explains why the Black Lives Matter movement is forcing a cultural reckoning in the mainstream media to confront its own racism, outright discrimination and lack of authentic and inclusive voices in dealing with Black and Brown communities.

The LA Times added, “No one embodied this aggressive, conservative ideology more than Harrison Gray Otis, the walrus-mustachioed Civil War veteran who controlled The Times from 1882 until his death in 1917.”

The newspaper’s own editorial specifically faulted its coverage of the Watts Riots of 1965, noting, the project “too often took a patronizing view of Black Angelenos, most egregiously in a piece called ‘Police Brutality: State of Mind?’ that used selective examples and unexamined quotes from police officers to heavily imply that police brutality was a thing of the past.”

Just like the Los Angeles Times, the Detroit media, is taking a similar approach by over-relying on Craig’s definition of police brutality and the continued protests in the city. In fact, coverage of the marches are often dominated with comments from Chief Craig as opposed to elevating the voices of the marchers and the necessity of racial justice. It’s as if the media has decided that no march against police brutality in the city should be viewed as legitimate unless it has Chief Craig’s stamp of approval.

The level of media indifference in Detroit only leads to the kind of sad acknowledgement that the Los Angeles Times arrived at decades later, and made on Sunday for its failure to do justice to the Black community in Los Angeles.

By failing to hold Chief Craig accountable, and reporting his statements verbatim without inquiring into their validity, the Detroit media is doing a grave injustice to Black Detroiters, who are the majority in the city.