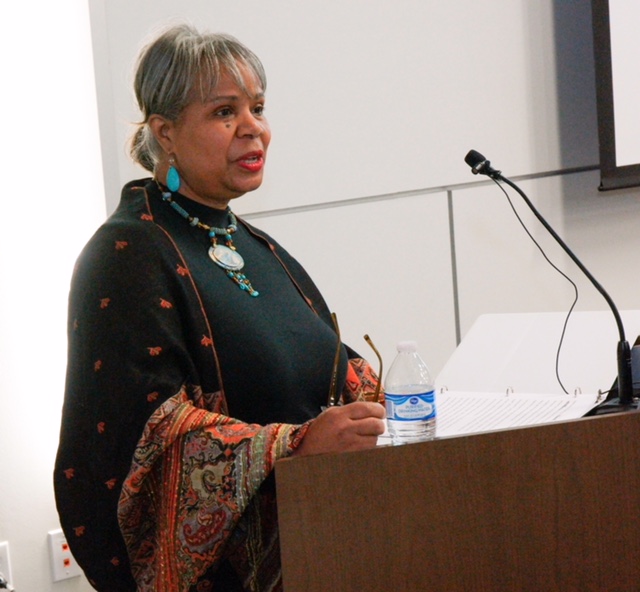 Janis F. Kearney, the first Presidential Diarist in the White House, who served in that role from 1995-2001 during the administration of former President Bill Clinton, and who is a member of The PuLSE Institute National Advisory Panel, will give the welcome remarks at the PuLSE Literary Circle Forum next Wednesday featuring the internationally renowned Jamaican scholar Rupert Lewis of the University of the West Indies as keynote speaker. Registration for the event is still open here.

A virtual event anchored from Detroit, America’s largest Black city, the December 2 forum with Lewis whose latest book  Marcus Garvey, documents the forging of his remarkable vision of pan-Africanism, will focus on the influence of Garvey, contribution of the Caribbean world to U.S. politics, and the election of Senator Kamala Harris, the first Black woman Vice President-elect and the first woman of Jamaican descent set to assume that role in the era of the Black Lives Matter movement.

The PuLSE Institute, Detroit’s independent and non-partisan anti-poverty think tank, is one of the first institutions in the nation to convene a forum that examines the significant contribution of the Caribbean world in the wake of the 2020 presidential election.

Kearney, a longtime book publisher, author and journalist also served for two years as a fellow at the W.E.B. DuBois Institute of African and African American Studies at Harvard University. Through Writing our World Publishing, her independent publishing company, Kearney has written or co-written eight books, including her first, the critically acclaimed Cotton Field of Dreams: A Memoir. In 2014, she founded the Celebrate! Maya Project, whose mission is to promote the life and legacy of Dr. Maya Angelou throughout Arkansas’ communities and schools.

At The PuLSE Institute, Kearney, joins other luminaries on the National Advisory Panel including Dr. Bernard LaFayette, a top aide to Rev. Martin Luther King Jr. and national coordinator of  King’s 1968 Poor People’s campaign, Sister Simone Campbell, the executive director of NETWORK, leader of the “Nuns on the Bus” campaign and preeminent Catholic social justice advocate, Dr. Arun Gandhi, the grandson of Mahatma Gandhi, Herb Boyd, the celebrated historian and author of best-selling books on Malcolm X and James Baldwin amongst others.

Wednesday’s forum has generated a lot of interest across the nation and in the Western Hemisphere.

Attorney Tina M. Patterson, the president and director of research at The PuLSE Institute, and whose work centers around social justice, equity and democracy underscored the importance of the forum.

“The influence of Jamaica and the Caribbean region cannot be overlooked when it comes to the quest for equality in America. Marcus Garvey demonstrated the power of conviction and dignity for Black humanity with his globally replicated vision of Pan Africanism, a philosophy dedicated toward freedom and equality for Blacks across the African diaspora,” Patterson said. “In the United States, this year of 2020 has experienced continuous racial unrest juxtaposed by the election of the first Black woman Vice President elect, Kamala Harris, also of Jamaican descent. The PuLSE Institute welcomes Professor Rupert Lewis, noted Jamaican scholar and authority on Marcus Garvey, to discuss this interconnection of the prominent global impact of the election and the undeniable influence and contributions of Garvey and other major Caribbean historical figures on Black political life and the ongoing quest for racial equality in America.”

The forum moderator is nationally renowned Detroit journalist, author and culture critic Bankole Thompson,  whose writings inspired the founding of The PuLSE Institute. His illuminating and influential work on economic and racial justice issues elevated the discourse around poverty and inequality in the nation’s biggest African American city. Thompson, who serves as the editor-in-chief of the Institute and the dean of the Academy of Fellows, is an opinion columnist at The Detroit News, where he writes a twice-a-week column on presidential politics, leadership, culture and social justice issues. He is the author of a pair of books on former President Barack Obama based on a series of exclusive sit-down interviews with Obama.

The PuLSE Literary Circle is a high profile online conversation series with authors whose books are making impact in the literary world. Professor Lewis will also examine the overall quest for racial and economic justice in America and across the global Black diaspora that was borne out of the killing of George Floyd by a white police officer in Minneapolis.

For inquiries about The PuLSE Literary Circle email info@thepulseinstitute.org