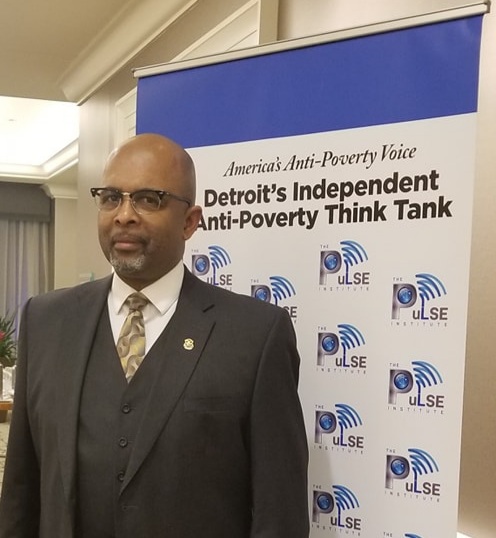 As the nation continues to grapple with the fallout of the gruesome death of George Floyd, who died under the knee of a white Minneapolis police officer in 2020, The PuLSE Institute, Detroit’s independent anti-poverty think tank is kicking off a major online lecture series to deal with police reform in 2021 and beyond.

The virtual innovative speaker program, the Chief William T. Riley Lecture Series in Police Transformation, is named after William Riley, the police chief of the City of Inkster, who is a senior fellow at The PuLSE Institute’s Academy of Fellows, where he is focused on criminal justice reform and poverty.

The program will feature top law enforcement executives from across the spectrum of the criminal justice system as well as other community stakeholders including advocates for reform discussing meaningful ways to create serious reforms in policing.

The series will emphasize the need for police officers to not only adhere to the rule of law, but respect the dignity and rights of Black people, who are routinely subjected to overbearing and humiliating law enforcement.

Chief Riley has been calling for police transformation in the wake of the death of Floyd and other African Americans who have died at the hands of police officers. For example, he has challenged other police chiefs to condemn acts of brutality whenever they are meted against innocent Black people. He has also flatly rejected the use of facial recognition technology for the Inkster Police Department, a software that is widely known to falsely identify Black and other minority victims as culprits. Because of the propensity of facial recognition technology to endanger the civil rights and civil liberties of Black people, Riley has been one of the rare leaders in law enforcement to openly express deep skepticism about the use of the technology.

The series will also explore federal civil rights enforcement and the role of the justice system in guaranteeing that the civil rights of the victims of police misconduct are protected.

A veteran law enforcement official, Riley, is a graduate of St. Paul’s College in Lawrenceville, Virginia as well as the Hampton Roads Regional Law Enforcement Training Academy. He has participated in many high level police executive trainings including the Mid-Atlantic/Supervisory Institute for Police Management at the Christopher Newport University, the Administrative Officers Management Program at North Carolina State University and the Senior Management Institute for Police Executive Research Forum at Boston University. He was also in charge of the Office of Professional Standards and Training/Recruiting Division at the Newport News Police Department earlier in his career.

Outside of policing, Riley, is actively involved in a number of community initiatives including serving on the board of the Detroit Wayne Integrated Health Network (DWIHN), which works to address substance abuse and mental health issues in the Wayne County area. On the DWIHN board, Riley, serves as the chairperson of the Recipient Rights Advisory Committee.

Riley previously served as the police chief in Selma, Alabama, the cradle of the Civil Rights Movement, before coming to Michigan to take over a once troubled Inkster Police Department in 2015.

“The institution/profession of policing in America is at a crucial crossroad. The tenets of Serve & Protect have been tainted by the egregious actions of a small number of our fellow law enforcement brothers and sisters. What is so sad about this situation is that America has been reforming policing in this country for more than a hundred years and yet the same complaints that many people of color about policing 100 years ago are still the same as today. In the past when law enforcement actions became heavy handed calls for reform start all over again,” Riley said. “I have been in policing for approximately 35 years and police reform one type or another has been constant through all those years. Some of those reforms have been hire more minorities and women, revamp hiring practices, community policing and a host of other reforms. Yet we always find ourselves right back dealing with most of the same issues.”

He noted that, “A major factor that has made this a watershed moment now has been the availability of video. The ever-present video in today’s society has given great credence to past and present complaints regarding negative policing actions in America such as George Floyd, Breonna Taylor and many others. It is time for a transformation in policing. There needs to be a complete paradigm shift in the profession of policing.”

Attorney Tina M. Patterson, the president and director of research at The PuLSE Institute said the series is part of the Institute’s commitment to police reform.

“Chief William T. Riley represents the prototype of community policing, and is a distinguished law enforcement official who has earned the trust of his community and fellow officers due to his sincerity and respect in upholding the responsibilities of wearing the badge. His approach to policing is far from the callous behavior we see all too often in police encounter videos, and his passion for true policing transformation rather than tolerable reform is infectious and necessary in today’s world, where lack of accountability continues to allow police to go unchecked and unscathed when Black bodies are lost in police encounters,” Patterson said. “Chief Riley understands that police play a powerful role in their respective communities, and with his style of leadership, he chooses to lead with honesty and humanity, rather than a lock up mentality, thereby transforming his community for the better. The PuLSE Institute looks forward to this Chief Riley lecture series and its refreshing approach to transforming police practices in our society.”

Bankole Thompson, the editor-in-chief of The PuLSE Instituteand the dean of the Academy of Fellows said the series is key to answering complex questions regarding the humanity of Black victims of police brutality.

“This will serve as an important engagement to confront the problems of policing and to offer requisite solutions to stop the civil and human rights violations that take place when Black bodies are visited upon with brutality in police encounters,” said Thompson, a nationally renowned journalist, culture critic and a twice-a-week opinion columnist at The Detroit News. “Chief Riley has demonstrated a commitment to help address one of the most profound issues of this era.  All hands must be on deck to protect innocent lives because we cannot allow what happened to George Floyd and others become the way of life. We have an obligation to change the trajectory towards racial equality and this series named after Chief Riley will help to achieve that.”