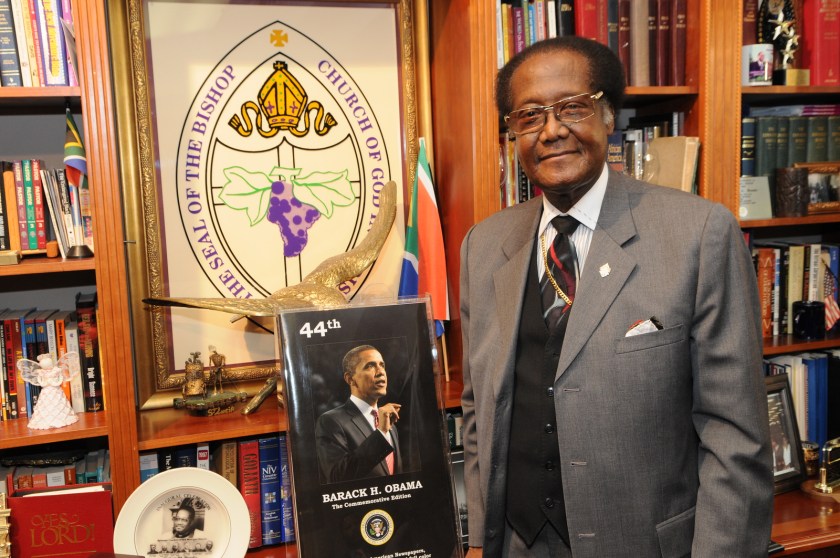 The memory of the late Bishop PA Brooks, the First Assistant Presiding Bishop of the Church of God in Christ (COGIC), the largest Black Christian denomination, and the dean of the faith community in Detroit, should not be lost in this dispensation because of his gallant contributions to the social and economic empowerment of the African American community.

That was the tribute message that Bankole Thompson, one of the nation’s leading Black journalists, who is the executive dean and editor-in-chief of The PuLSE Institute, gave last Sunday, August 14, during a ceremony at the Cathedral Conference Center of the Church of God in Christ in Detroit, which was renamed the Brooks Cathedral Center.

Thompson, who is a twice-a-week opinion columnist at The Detroit News, and the author of a pair of books on President Barack Obama based on exclusive sit-down interviews with Obama, was invited by Bishop Zachary Hicks, the jurisdictional prelate of the Northeast Michigan Jurisdiction, to deliver the community tribute at the ceremony about the public impact and legacy of Bishop Brooks.

Bishop Brooks, who passed away two years ago at 88, had a profound respect and admiration for Thompson’s work as a courageous journalist and cultural critic, and often described him as, “the voice of the Black community in Detroit.” He invited Thompson on numerous occasions, including Black History Month celebrations and other significant events in Black life, to serve as the Sunday morning speaker at New St. Paul Tabernacle Church of God in Christ, where he served as the senior pastor for decades.

For example, in 2015, after the Mother Emanuel AME Church racial massacre in Charleston, South Carolina, was  carried out by a White supremacist, Bishop Brooks, invited Thompson known as the columnist of conscience to give the Sunday morning address at his church the week of killings, where he explained the historical context of the attack on the Black church, and the need to continuously speak out against racial injustice.

“Today we honor a community liberator. His name was Philip Aquilla Brooks. And New St. Paul Tabernacle Church of God in Christ was his parish. He was not an apologist. He was a truth teller. He was not a consensus seeker. He was a molder of consensus. He did not look the other way,” Thompson said at the ceremony on Sunday. “He came to the rescue of those who were dejected and rejected. He demonstrated profound generosity to those who were in need and looked down upon. When Hurricane Katrina struck unveiling a mass underclass in America that has long been ignored, he came to the rescue of displaced families by providing housing.”

In a moving tribute, Thompson described Bishop Brooks as a pioneer in economic empowerment, and the right to self-determination in the Black community and a strong voice for racial justice.

“Whenever his community was under siege from the oppressive forces of racial inequality, under siege from what the Reverend Martin Luther King Jr., called ‘the lips of interposition and nullification’, Bishop Brooks took a stand and answered thunder with thunder on the defining issues that affected Black life. He defended the integrity of the church and the integrity of the Black community. He believed that Black Lives Matter long before it became a slogan in this era,” Thompson said. “He understood that the church as espoused by the theologian Cain Hope Felder, sometimes can be a sleeping giant. The relevance and impact of his ministry spoke to the living and enduring power of the church. His life was a beautiful symphony of freedom and justice.”

Thompson connected Brooks’ work to the early founders of the Black church.

“The blood that runs through the cultural veins of emancipation, empowerment and independence in Bishop Brooks can be traced to Bishop Charles Harrison Mason Sr., the founder of the Church of God in Christ, can be traced to Bishop Richard Allen, the founder of the African Methodist Episcopal Church, can be traced to Archbishop Desmond Tutu, the spiritual father of the anti-apartheid campaign,” Thompson said. “Like these founding fathers of Black religious power, Bishop Brooks used the church to give hope to those who were sentenced to a state of permanent exclusion.”

Thompson added, “There’s been no African American religious leader in the last half century in Detroit, who has demonstrated to the nation an educated understanding of the nexus between faith and politics, and worked to ensure that the church was an agent of transcending radical social change than Bishop PA Brooks.”

The scope of Brooks influence was felt beyond the confines of the church. For example, former Detroit Mayor Coleman A. Young, and Queen of Soul Aretha Franklin, sought counsel from him. Presidents and members of Congress attended his church to receive admonishment from him.

“His life was a gift to mankind. He made a lasting contribution to our civilization as an institution builder, and for that we say thank you Bishop Brooks. We need more institution builders to safeguard our culture, our civilization and inspire and guide the next generation of leaders,” Thompson explained. “When he passed away Presiding Bishop Emeritus Charles E. Blake told me in one of my conversations with him that Bishop Brooks was the intellectual guiding light of the Church of God in Christ.”

In concluding his remarks, Thompson, applauded Bishop Hicks for ensuring that the legacy of Detroit’s beloved spiritual father continues to have impact on generations to come.

“That is why this dedication ceremony is so important. I want to thank Bishop Hicks for his exceptional foresight and vision for carrying out this dedication to keep Bishop Brooks’ legacy alive,” Thompson said.