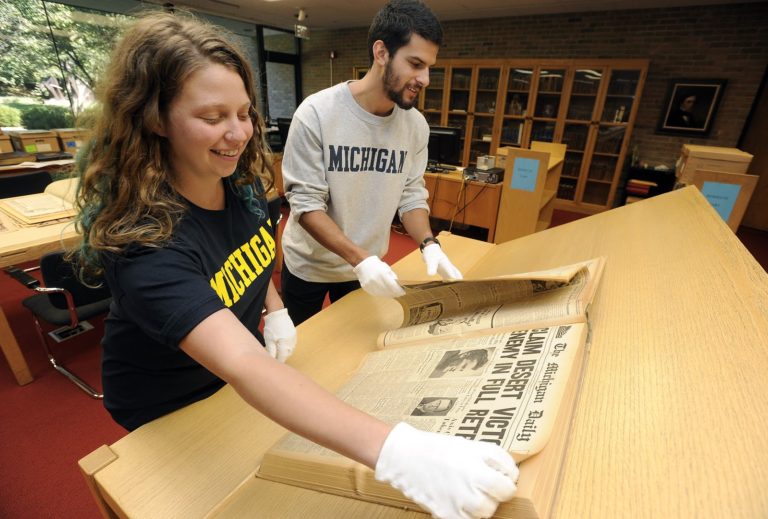 The University of Michigan Bentley Historical Library, a first-class depository in the world, and where the papers of every Michigan governor are kept as well as the works of highly influential individuals and organizations in the state, will now add the Institute for Public Leadership and Social Equity, The PuLSE Institute to its collection. The Institute launched last July is a Detroit-based non-partisan and independent think tank devoted to fighting poverty in the city, the first of its kind.

The Bentley Library in a recent letter to The PuLSE Institute stated, “The Bentley Historical Library will capture and preserve The PulSE website as an archival collection. We believe PuLSE represents a significant piece of current Detroit history.”

Last October, the Institute announced a groundbreaking initiative called Business Leaders Against Poverty (https://thepulseinstitute.org/business-leaders-initiative/), which brings together select CEOs and industry captains in Detroit committed to championing poverty alleviation and social inclusion. It is the first of its kind in Detroit, where many are beset by poverty.

The Institute’s president and director of research, Tina M. Patterson welcomed the development as a remarkable step.

“Since its inception, The PuLSE Institute has been dedicated to addressing the glaring issue of poverty in Detroit. From advocating for the right to literacy for Detroit schoolchildren to formulating the first ever committee of business leaders against poverty, the work of the Institute has consistently remained steadfast in its mission to be a vehicle for research and policy formulation of anti-poverty solutions,” Patterson said. “This archival by the Bentley Library is significant since it documents our work as a necessary and crucial focal point of this time in Detroit history, where despite economic recovery from a historic bankruptcy, Detroit holds the top spot among the nation’s big cities in terms of poverty.”

Patterson is a Detroit native and attorney who previously worked as a federal government attorney before leaving the Social Security Administration to head the Institute. During her stint at the Social Security Administration, she wrote legally binding decisions for administrative law judges throughout the United States and Puerto Rico.  She advised judges on legal sufficiency and analysis of social security regulations as well as applied specific federal circuit precedent to cases. She brings a strong commitment to social justice, equity and democracy and the need to give voice to the plight of those who feel economically marginalized by society.

The Bentley Library documenting the work of the Institute according to Patterson, is an indication of how rapidly growing and influential The PuLSE Institute has become in its less than a year of existence.

“Now, with our unique existence as the only anti-poverty think tank in Detroit and our honest transparency and critical analysis of the multifaceted issues of inequality, we will be enshrined in perpetuity among the most notable luminaries in Michigan history as a blueprint for others to follow to keep the fight for equality alive,” Patterson said.

The Institute’s editor-in-chief Bankole Thompson, a renowned journalist also underscored the significance of the Bentley archive.

“There is no doubt that The PuLSE Institute is the premier think tank in Detroit that is exclusively committed to addressing poverty and economic inequality. This archive by Bentley affirms that role in history and in the public conscience,” Thompson said. “This existence and work of the organization is here to stay and will be never erased because a century from now generations of Detroiters and beyond will know about The PuLSE Institute.”

Thompson brings to The PuLSE Institute, an unmatched wealth of journalistic experience regarding decades of Detroit’s economic ebb and flow including formerly serving as editor of the city’s two black newspapers. He was among the first black journalists in the nation to conduct face-to-face sit-down interviews with former President Barack Obama, from which he authored two books on Obama. He is currently an opinion columnist at The Detroit News, where he writes a twice-a-week column on politics and culture. He also hosts REDLINE, a daily news talk show that airs 12-2pm ET on 910AM Super Station. Because of his respected probing skill for asking tough questions on issues of inequality, the Detroit Economic Club, invited him as the moderator of its “Poverty and Prosperity in Urban America,” forum Feb. 12 at the Detroit Masonic Temple.

The Institute has captivated not only the grassroots community in Detroit as an independent voice to advance the debate around inequality, it has also captured the attention of the business leadership community of Detroit. For example, it is organizing a CEO breakfast forum on poverty Monday, March 11, 7:30am at the Westin Book Cadillac Hotel in downtown Detroit (https://thepulseinstitute.org/2019/01/28/detroits-top-industry-captains-to-talk-poverty-march-11/), which is the first city-wide conversation of its kind with Detroit’s top industry captains.