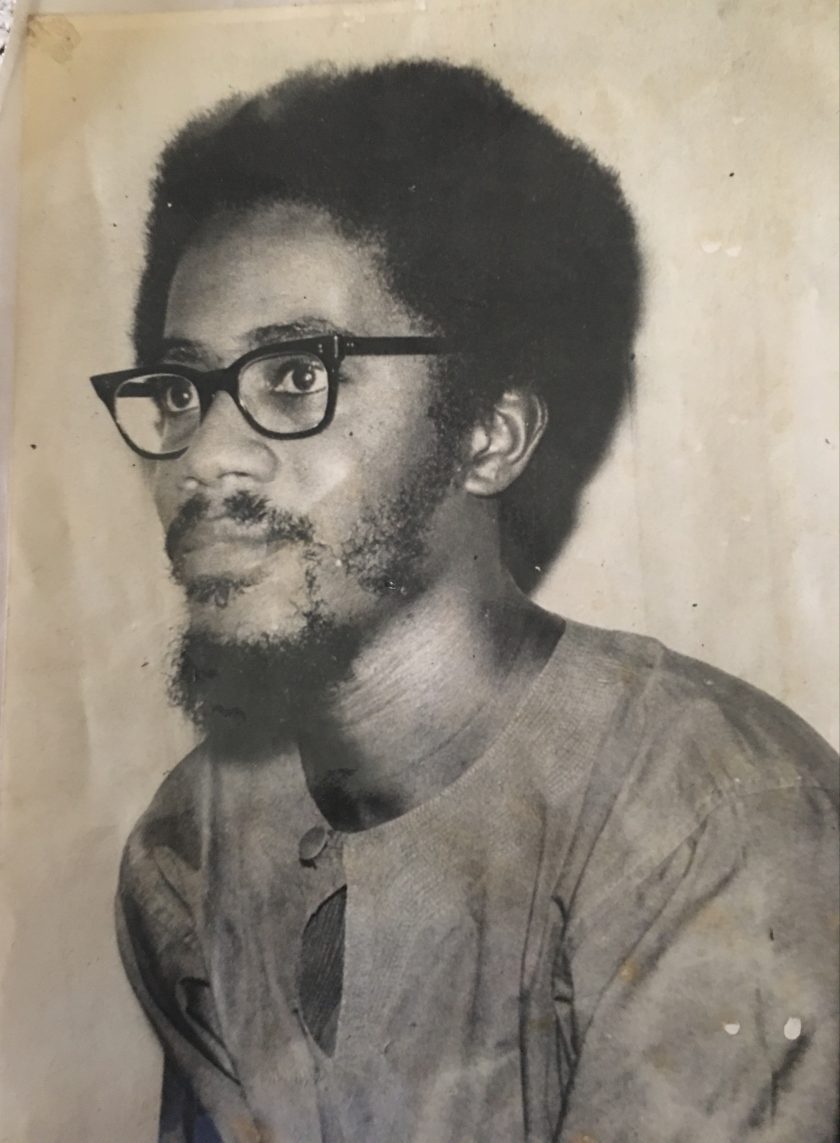 Editor’s Note: The roots of the current push against police brutality is directly linked to the resistant movements of the 1950s and 1960s, when blacks were vigorously fighting against colonialism and Jim Crow. Whether it was in the U.S., Caribbean and Africa, black activists and intellectuals of that era were united in a concerted effort to end what Nelson Mandela once called, “Man’s inhumanity to man.” One of the archetypal figures of foresight and concern for the freedom of blacks that emerged out of the anti-colonialist era, was the writer and historian Walter Rodney, who became one of the leading figures of the 20th century.

Like Rev. Martin Luther King Jr., Rodney, also received his PhD in his mid-20s and was assassinated before the age of 40.

From his hometown of Guyana in the Caribbean, where he started to indict the vestiges of the institution of slavery that are evident in the modern day structures of economic and social injustice, Rodney, would command the global stage as one of the greatest intellectuals to ever seek a radical change in the oppression of black people.

His 1972 classic, How Europe Underdeveloped Africa, would become one of the most significant books written on the history of exploitation of the continent of Africa by European colonial powers. His seminal work influenced African American scholar and former Columbia University professor Manning Marable’s didactic book, How Capitalism Underdeveloped Black America, which was dedicated to Rodney.

On the anniversary of Rodney’s death forty years ago, and the Juneteenth observance this week, we reflect on Rodney’s vision for black liberation, and how the thrust of his writings affirmed that black lives matter, and continue to serve as an impetus to the present drive to stamp out police violence on blacks all over the world.

Journalist Bankole Thompson, the editor-in-chief of The PuLSE Institute, talks to the distinguished and internationally renowned political scientist Dr. Rupert Lewis, Professor Emeritus of Political Thought and Research Fellow in the PJ Patterson Centre for Africa-Caribbean Advocacy about Rodney’s impact on the Black Lives Matter movement.

A scholar of the Garvey movement and Caribbean radicalism in the twentieth century, Lewis, is the author of Walter Rodney’s Intellectual and Political Thought and also a biography of Marcus Garvey in the Caribbean Biography series published by The UWI Press. He has edited books on George Padmore, the Trinidadian Pan-Africanist and Richard Hart, the Jamaican Marxist.   He is a member of the National Council on Reparation.

PULSE: The death of George Floyd for many around the world represents the lamentations of the international black struggle for equality. Where do you place Walter Rodney in this global outcry against police brutality?

RUPERT LEWIS: Police brutality is an expression of state violence. Rodney was killed by a soldier with a booby-trapped walkie-talkie on June 13, 1980 in Guyana so he too was a victim of the violence of the state. He spoke out against state violence and wrote an essay on George Jackson’s incarceration and his killing in 1971.  There is a tradition of struggle and resistance out of which Black Lives Matter evolved.

One hundred years ago in  August 1920, the Declaration of Rights of the Negro Peoples of the World was discussed. This Declaration was adopted at the first convention of the Universal Negro Improvement Association and African Communities League held in Madison Square Garden, New York City. Some 25000 people participated in this convention.  This was organized political activity that affirmed the global rights of Africans and people of African descent. Walter Rodney’s activism in the 1960s and 1970s and the mass actions in the United States today need to be placed in this context.

In 1968 Walter Rodney met Amy Jacques Garvey and when he was banned from re-entering Jamaica after attending a Black Writers’ Conference in Montreal she stood at her gate encouraging university students to protest the ban. Walter Rodney (1942-1980), graduated from the University of the West Indies in 1963 and went on to earn his PhD in African History from the School of Oriental and African Studies, University of London. His dissertation was A History of the Upper Guinea Coast, 1545-1800. He went on to teach at the University of Dar es Salaam, Tanzania and in 1968 was recruited to introduce the teaching of African History at the University of the West Indies. The Jamaican government ban on Rodney had come after a ban on books by Malcolm X, Stokely Carmichael, the Black Panther Party and any publication advocating Black Power. He returned to teach at the University of Dar es Salaam in the early 1970s where he published his classic work How Europe Underdeveloped Africa in 1972.

RUPERT LEWIS: His response would be one of solidarity as Black Lives Matter is carrying on the struggles and introducing new measures into a tradition of black resistance to imperial power.

PULSE: Many view police brutality as part of the longstanding institutional social control of black people in America going back to the days of slavery when slave patrols sought to prevent and control the mobility of slaves seeking freedom. How should America reconcile the racist roots of this kind of criminal justice system and make police brutality a thing of the past?

RUPERT LEWIS: This requires a movement that insists on systemic and sustained political, cultural, economic and juridical, changes.

PULSE: In one of his last essays before he died, Walter Rodney wrote, “Clearly, there could never be full justice under colonialism, capitalism and imperialism because of deep-rooted class inequalities.” Do you see this as part of the undercurrent of frustration and anger driving the call for justice for George Floyd, and other blacks killed by white police officers in America?

PULSE: Walter Rodney observed that, “For a small nation, Guyana has produced a discouragingly large number of lackeys and stooges,” who hide behind the leader of the nation. He talks about how the Guyanese people complain about “square pegs in round holes,” but he noted those are individuals who “flourish because each one is prepared to be his master’s voice.” Several years later, the black scholar Manning Marable also talked about a certain class of African Americans who “may be prepared to denounce their own people in order to advance their careers.” What impact does this on the collective demand for black equality?

RUPERT LEWIS: Rodney and my friend, Manning Marable, bring to the fore the social/class heterogeneity of the movement and the need to be vigilant that those among us who are already comfortable, in positions of wealth, power, will fall short of what is required for transformation.

PULSE: During the Black Lives Matter protest recently in the United Kingdom, we saw demonstrators in the City of Bristol took the statue of 17th century slave trader Edwards Colston and tossed it into the river. In the quest for black freedom echoed in the calls for justice for George Floyd, do you see the elimination of slave statues in the UK, and the removal of confederate monuments in the United States of America as significant in that effort?

PULSE: Walter Rodney’s body of work underscores the role of the black intellectual in pushing for equality. Do you see a continuation of that tradition today in calling out the oppression of black people?

RUPERT LEWIS: Yes there is a continuation of the tradition today. Rodney’s body of work and his exemplary life of struggle resonates today among several generations of people who have been in the struggle.

PULSE: Is there a real awakening taking place as a result of these demonstrations we are seeing in cities across the globe including America, Europe and Africa?

RUPERT LEWIS: Yes, there is an awakening taking place at a moment of global pandemic and economic crisis with disproportionate negative impact on our people so we are required to find ways out of these conditions. The awakening is uneven. In some places it is high, in other parts not so. So there is work to do among our people in different geographic locations. The fact that the awakening is taking place in the United States is however, extraordinarily important because America remains the dominant world power.

PULSE: Independent institutions and organizations that spoke directly to the needs of the black community were significant during the era that birthed Walter Rodney, James Baldwin, Stokely Carmichael, Shirley Chisholm and others. Do you see institutions in this current dispensation as relevant instruments in affirming the humanity of blacks?

RUPERT LEWIS: Yes, we have to give birth to institutions that serve our interest not only on a national basis but on a transnational one hence the importance of linking our peoples through economic, social, cultural and other institutions. This is a creative task that ought to begin in our communities and the zones with which we are most familiar and then seek to grow them in other places. We need to develop our own best practices for black organizations.

PULSE: Martin Luther King Jr. got his PhD at 26 and Walter Rodney earned his PhD at 24. King died at 39 and Rodney was dead at 38. Are there any striking parallels between the lives of these two intellectual giants and civil rights campaigners of the 20th century or is their timelines just historical coincidence?

RUPERT LEWIS: There are parallels. The system of power wants the best and brightest of our people, who take up the mantle of leadership, dead.

PULSE: In your book, “Walter Rodney’s Intellectual and Political Thought,” you sought to place Rodney as the product of a long running tradition of black intellectuals from the Caribbean whose work served as an impetus to the anti-colonialist movements around the world. Why was it important for you to establish Rodney’s intellectual lineage?

RUPERT LEWIS: I wrote the book on Walter Rodney to educate the generation that came after me about the struggles of my generation. Ancestral knowledge is key. I was profoundly influenced by my relation with Amy Jacques Garvey (1896-1973) when I lived in a back room in her home for a few years before her death. My exposure, through her, to the Garvey movement of the 1920s and 1930s and the labour and nationalist movement in the 1940s to 1960s shaped my outlook. We are not all privileged to benefit from such close contact but we can read, study and speak with the survivors of previous engagements.

RUPERT LEWIS: Ngũgĩ wa Thiong’o is absolutely right with respect to our writers who function on multiple platforms shaped by changing technology. The next generation has to be built in association with today’s and yesterday’s activists and writers. This means studying the past, the present while framing what one would like the future to be like.