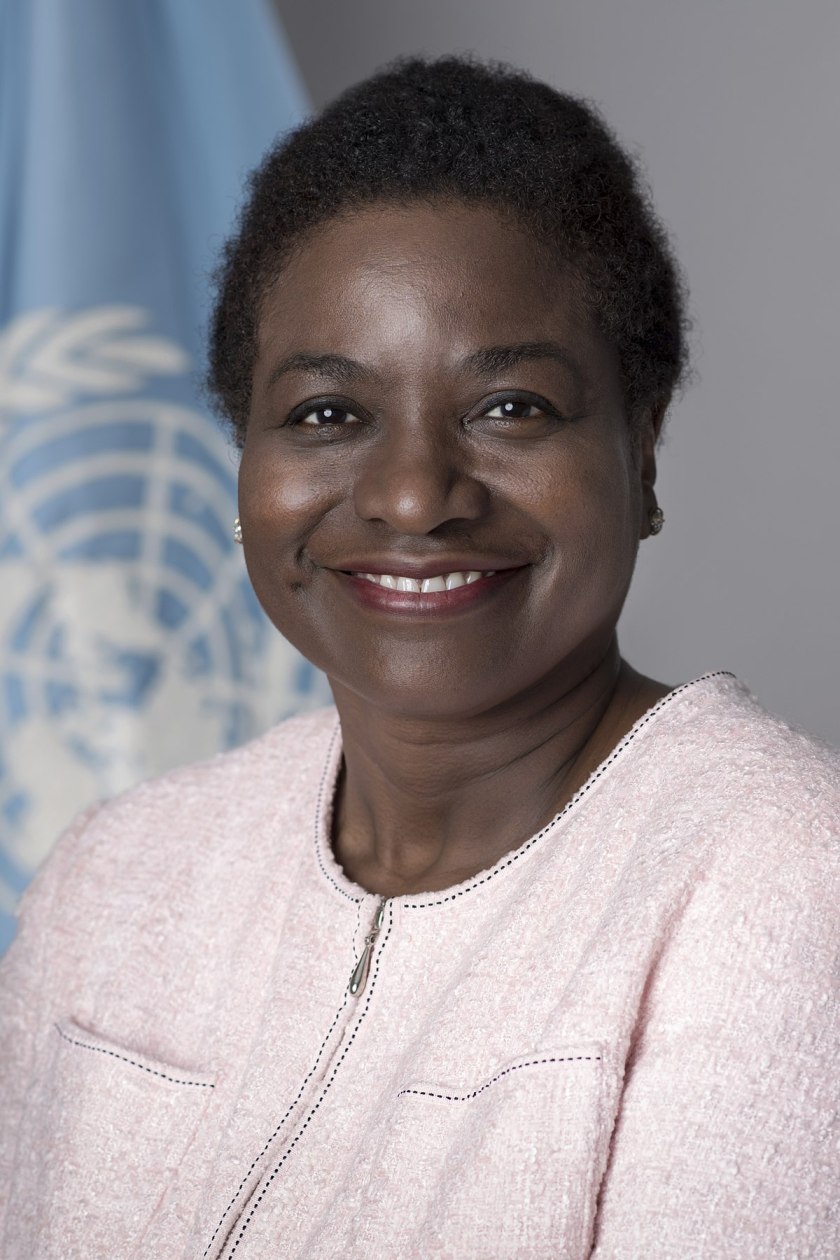 Dr. Natalia Kanem, United Nations Under-Secretary General and Executive Director of UNFPA, the United Nations Population Fund, has accepted the invitation of The PuLSE Institute to deliver the keynote address at the PuLSE Global Forum on Women Leadership in Fighting Poverty, an online forum which will take place on Thursday, March 4 from 4-5:30pm. The theme of the virtual program to recognize Women’s History Month in March, and to highlight the significant contributions of women to society is “Investing in Women’s Leadership: The 21st Century Challenge to Combat Global Poverty.”

The audience is being drawn from a cross section of the global community to include women leaders of civic organizations, business executives, anti-poverty advocates, students and individuals who are working in the areas of economic justice. The Institute has invited about 100 high school students from the Detroit Public Schools Community District through Superintendent Nikolai Vitti to participate in this historic national gathering. They will join members of the Institute’s Junior Fellows program at the forum.

As a national independent and non-partisan anti-poverty think tank headquartered in Detroit, The PuLSE Institute, believes that in the fight against global poverty, the challenge facing the 21st century is not a question of whether there are enough women who are willing to join the campaign against poverty. The issue is there are not enough women in leadership positions of influence with the resources and decision-making powers to bend the arc of the moral universe towards justice. This century’s biggest deficit is the lack of women in top leadership roles across the political and socioeconomic spectrum who could directly influence how resources are distributed in the fight against poverty, whose victims are routinely women and children.

For example, the United States in the 200-year history of our republic, just elected the first female vice president Kamala Harris, who is also the first Black woman to become the second in command of the world’s leading super power. Even though Harris’ ascendance to the vice presidency is an important chapter in the quest for gender leadership, her elevation comes at a time when women hold significantly less leadership roles, make less money than men and live in poverty at higher rates than men.

In a statement Dr. Kanem issued to The PuLSE Institute ahead of the March forum, the UN official noted that, “The rights of women and girls should be non-negotiable — yet they are constantly on the negotiating table, and too often on the chopping block.  Women and girls must have the ability to make their own choices, particularly regarding sexual and reproductive health, which is essential for realizing full gender equality and women’s empowerment.  But for too many, reproductive rights and choices remain an elusive dream.”

Dr. Kanem added, “Now, COVID-19 threatens to roll-back decades of hard-won progress in advancing women’s health, rights and empowerment. Gender-based violence is skyrocketing during the pandemic. Child marriage, female genital mutilation, and adolescent pregnancy are all on the rise, and as always it is the poorest girls who are at greatest risk. COVID-19 has placed a magnifying glass on gender inequality, structural racism and pervasive discrimination all over the world. Yet by highlighting the deep inequalities that persist in our societies, the pandemic has created an opportunity for a reset. If we face up to these inequalities and truly heed the lessons COVID is teaching us, we can chart a better path forward and truly build back better for everyone.”

As leader of the UNFPA, the United Nations sexual and reproductive health agency, Dr. Kanem, is recognized for her powerful advocacy for the rights and choices of women and girls and as a key influencer and thought leader in the formulation of global policy on sexual and reproductive health and rights in the Sustainable Development Goals era and has been listed on the Gender Equality Top 100.

Dr. Kanem advocates for the rights of women and girls on the Inter-Agency Standing Committee, an international forum for humanitarian partners, and as co-chair of the Reference Group of Family Planning 2020-2030, a global partnership for investing in rights-based family planning. She has made leadership contributions to the Secretary-General’s organizational transformation initiatives towards reform of the United Nations development system, including co-chairing the Strategic Financing Group of the United Nations Sustainable Development Group, and as a member of the High-Level Steering Groups on Gender, Youth, the System-wide Response to Sexual Exploitation and Abuse and the global response to COVID-19.

“The PuLSE Institute is honored to welcome Dr. Natalia Kanem as our keynote speaker for the National Women’s Forum on Poverty. As an institute mission-driven to challenge the inequalities we face in our society, we are deeply committed to the investment of women in leadership roles, as well as elevating the voices of women across a diverse sectors because we recognize that traditionally, these are positions women are not expected to occupy and have been historically excluded from obtaining,” said Attorney Tina M. Patterson, the president and director of research at The PuLSE Institute. “However, the globe has reaped the benefits when women are vested with greater authority, resources, and leadership, as their efforts greatly assist in ensuring the protection of fundamental democratic liberties such as voting rights, as well as help to expand essential living components including access to healthcare, cleaner environments, and greater economic opportunities for communities rise above income limitations.”

Patterson noted, “Dr. Kanem understands the unique challenges women face in navigating a society built with obstacles to keep them within confined parameters, and her body of work is a testament to the realization that when women are conferred with accessible and equitable resources and opportunities to overcome these challenges, our shared humanity grows stronger and our pursuit of an inclusive society for all to thrive becomes within reach.”

Bankole Thompson, a nationally renowned journalist and culture critic, who is the editor-in-chief of The PuLSE Institute and the dean of the Institute’s Academy of Fellows underscored the significance of the forum.

“Dr. Kanem’s work stands out on the vast landscape of relentless advocacy for the rights of women and in protecting the dignity of the marginalized. It is important to have women of her caliber at the highest levels of international governance authoring justice and equality on paper,” Thompson said. “We are at The PuLSE Institute are looking forward to her keynote address because there is a fierce urgency in such desperate time when the rights of the dispossessed and disenfranchised are imperiled. Make no mistake all hands should be on deck in the global push to enhance women leadership in the fight against poverty.”

Thompson, who is a twice-a-week opinion columnist at The Detroit News, added, “In fact, I’m deeply inspired by the 19th century abolitionist Frederick Douglass, who championed the universality of the freedom and empowerment of women. This fight will not be easy but we must be unwavering in our commitment as we cross the Rubicon. After all, poverty remains our greatest adversary and the greatest danger to human development. As we approach a new epoch in history with the devastation of the coronavirus pandemic, it is all the more necessary to finally find a vaccine to eliminate the virus of poverty.”

C. Paschal Eze, the chairman of The PuLSE Institute board said, “With Kamala Harris as U.S. vice president, Dr. Natalia Kanem as UNFPA chief, and many other women around the world inventing, investing, innovating, influencing and inspiring positive change, it is clearly a monumental mistake to ask if women can do great things like men. Of course, they can. Innumerable women are making palpable impact everywhere, including right here at The PuLSE Institute where Attorney Tina Paterson serves creditably as president.”

Several members of The PuLSE Institute National Advisory Panel will be in attendance to participate in the women’s forum. They include Sister Simone Campbell, SSS, the executive director of NETWORK, the Lobby for Catholic Social Justice in Washington D.C., Dr. Arun Gandhi, the grandson of Mahatma Gandhi and former presidential diarist Janis F. Kearney.

Campbell, one of the nation’s leading voices for economic justice, immigration reform and health care in the Catholic community, will deliver the invocation at the forum. Campbell, who is a prominent ally of Pope Francis’ anti-poverty crusade, gave the invocation at the opening of the 2020 Democratic National Convention, where President Joe Biden was nominated.

“Women are the key to economic development! They are the first educators, health care providers, entrepreneurs, economists for any family,” Sister Campbell said. “This Women’s History Month at The PuLSE Institute’s National Forum on Women and Poverty, we honor the mothers of our movement and attempt to learn from their example. This much is clear: to advance justice, women are the leaders.”

Dr. Gandhi, an international anti-poverty advocate and the founder and former director of the M.K. Gandhi Institute for Nonviolence, and a board member of the Nelson Mandela Children’s Hospital in South Africa, will give the welcome remarks at the forum.

Kearney, the first Presidential Diarist in the White House, who served in that role from 1995-2001 during the administration of President Bill Clinton, and a former fellow at the W.E.B. DuBois Institute of African and African American Studies at Harvard University, will offer remarks during the forum.

A number of women leaders in the corporate business community are slated to attend the forum including business executive Cynthia J. Pasky, the president and CEO of Strategic Staffing Solutions, an international woman-owned IT staffing company headquartered in Detroit, who will speak at the forum.

The PuLSE Institute is convening the National Forum on Women and Poverty because as an anti-poverty think tank, gender justice aligns with our mission to fight poverty and inequality. The Institute understands that it is a moral necessity for women to assume leadership roles and to act as advocates for themselves in the larger global community in the fight against poverty. The National Forum on Women and Poverty is a foundational investment in driving the demand for more women in leadership positions, which will nurture and create a more just and equitable society. Investing in women leadership, is an investment into a justice-oriented future of the 21st century.

For more information about the forum email info@thepulseinstitute.org.