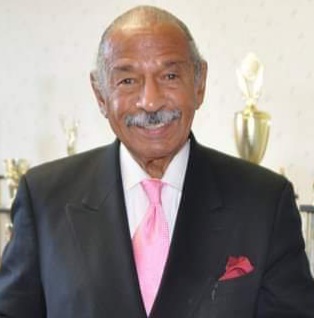 Former Detroit Congressman and civil rights hero John Conyers Jr., was not the Haitian ambassador to the United States. He was not a special envoy appointed by the government of Haiti, which represents the poorest Black nation in the Western Hemisphere, to table issues important to its democratic future before members of Congress in Washington D.C.

But Conyers because of his commitment to civil and human rights issues would emerge in the halls of the United States Congress as the biggest champion for democracy and the rule of law in Haiti. He used his longstanding influence as a founding dean of the Congressional Black Caucus, and as a senior member of the world’s most powerful legislative body to make Haiti a top priority. He did so with an educated understanding of the plethora of issues facing Haiti and insisting that the people of the Caribbean nation must be able to chart their own future and visibly express the right to self-determination.

That is why the current political crisis in Haiti that has arrested the attention of the international media and those in the foreign policy planks of Washington in the wake of the assassination of president Jovenel Moïse at his residence, is missing the voice of Conyers, a political statesman who died in 2019 after serving for five decades in Congress. If he were alive, Conyers, who first introduced the bill calling for a national holiday for slain civil rights leader Reverend Martin Luther King Jr., just four days after King’s assassination,  would be working right now to avert the seeming political transfix in Haiti that could further damage the democratic aspirations and hopes of the Haitian people.

“When I started working on Haiti In the mid 1990s, Congressman Conyers was by far the leading voice in Washington for democracy and sovereignty in Haiti.  He led Congressional delegations to Haiti,  convened important discussions in Washington, and spoke out publicly in the press,” said Brian Concannon, the founder of the Boston-based Institute for Justice and Democracy in Haiti. “The hallmark of Rep. Conyers’ involvement was basing everything he did on what he heard from the Haitian people, not on ideas hatched in Washington.”

Concannon added, “One notable example was a delegation he led in the late 1990s. He had been concerned that Congressional visits to Haiti were carefully-managed echo chambers, where members heard from members of the Haitian elite hand-picked by the Embassy to tell Congress what the State Department wanted them to hear. So he insisted on meeting with a group of human rights advocates at one of the organization’s offices.”

“The Embassy fought his plan, even claiming the visit was too risky, which made Rep. Conyers more insistent on having the meeting. In the end, the meeting was a success: the members of Congress heard important information they had not heard before, much of it inconsistent with the Embassy’s reports; Haitian human rights leaders felt heard; and important connections were developed between Haitian human rights leaders and Congressional offices,” Concannon said. “One CBC member told me that evening that he had been on several delegations to Haiti, but that meeting was the first time he had met a Black Haitian.”

Concannon, a former United Nations human rights officer said, “Another hallmark of Rep. Conyers’ leadership on Haiti was his belief in the basic tenets of democracy. When he heard discussions about what Haiti should be doing that was based on analyses and recommendations of policymakers, economists and others from outside Haiti, he would invariably ask ‘but is that what Haitians want?’  When the response to his question was a technical explanation of what was best for Haiti, Rep. Conyers would push back, asking ‘why can’t we let Haitians weigh what you are saying and make the decision for themselves?”

For example, in 2012, during the cholera outbreak, Conyers sent out a letter to then U.S. Ambassador to the United Nations Susan Rice urging her to press the UN for immediate intervention.

“As cholera was brought to Haiti due to the actions of the UN, it is imperative for the UN to now act decisively to control the cholera epidemic. UN authorities should work with Haiti’s government and the international community to confront and, ultimately, eliminate this deadly disease from Haiti and the rest of the island of Hispaniola. A failure to act will not only lead to countless more deaths: it will undermine the crucial effort to reconstruct Haiti and will pose a permanent public health threat to the populations of neighboring nations,” Conyers wrote at the time.

But Conyers also gave Detroit a prominent seat in the discussions about the future of Haiti as he would host town halls across the city. In doing so, he brought issues of international governance and democracy into their communities and explained to his constituents how they are all part of an inter-connected world. Haiti’s gallant history, which dates back to when revolutionary leader Toussaint L’Ouverture, led a remarkable and successful revolt against slavery that consequently led to the historic defeat of French colonial rule and drove France away from Haiti, was always at the back of Conyers’ mind.

“I thought about him (Conyers) immediately when I heard about the tragedy with the president of Haiti,” said former Detroit City Councilwoman JoAnn Watson, who once worked for Conyers. “Congressman Conyers’ heartbeat was connected with Haiti. It was not based on votes for his career, and it was not something that was going to yield him campaign contributions.”

She added, “Congressman Conyers was absolutely and singularly linked to Haiti in ways I have not seen any other person connected on his level. It was his compassion and connection to this country that stood out, which too often is referenced as the poorest but they are not poor in faith and in their aggressive search for peace, recognition and dignity.”

No one from the Detroit Congressional delegation has held any kind of public awareness campaign or forums  in the city that are centered around the current crisis in Haiti as Conyers would have done. And in Congress, both the moral and political clarity that came with his advocacy was unmatched. That is all the more reason why his absence has left big shoes to fill.

“People in prominent Black cities such as Detroit already have a strong understanding of how structural racism in the U.S. pervasively affects government policy in ways both obvious and subtle, and disempowers people of color and poor people. That understanding is easily transferable to the pervasive racism in U.S. foreign policy, especially to Haiti.  People already have their hands full fighting racism at home, but it would be enormously helpful to people in Haiti and elsewhere if some of us were able to also oppose U.S. racism abroad,” Concannon of the Institute for Justice and Democracy in Haiti said.

Bankole Thompson is the editor-in-chief and dean of The PuLSE Institute, Detroit’s national independent anti-poverty think tank. He is a twice-a-week opinion columnist at The Detroit News, where his column appears on Mondays and Thursdays. He is the host of REDLINE, a two-hour news magazine and political commentary radio show on 910AM Super Station-Detroit, which airs Monday through Friday from 11am-1pm EST. For inquiries email  info@thepulseinstitute.org.