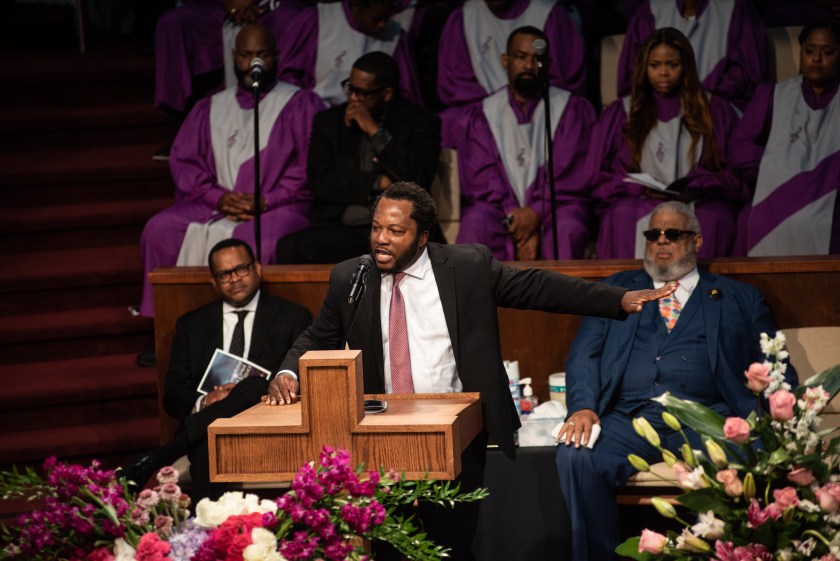 In a remarkably moving tribute to the enduring legacy of Black women who worked on the slave plantations in the Deep South, Bankole Thompson, one of the most outspoken journalists on race and economic justice issues in the nation, called Janie Cousar Kinloch, a founding mother of the American Republic during her funeral service at Triumph Church in Detroit last weekend.

Thompson, who is the editor-in-chief and dean of The PuLSE Institute, Detroit’s national anti-poverty think tank, is a twice-a-week opinion columnist at The Detroit News and the host of a two-hour daily show on 910AM Super Station-Detroit. A leading voice in the media on race, leadership and economic inequality issues, Thompson, has been described by the Eisenhower Foundation in Washington D.C. as a “courageous voice on behalf of the dispossessed and disenfranchised, a shining example of journalism for the public good.”

A proud daughter of the American South, Cousar Kinloch, commonly referred to as Mother Kinloch, was born on March 7, 1943 in Dillon County, South Carolina, a state that is central to the Black experience because of its deep and sordid history as one of the major anchors of slavery, and a founding member of the Confederacy.

According to her obituary, Mother Kinloch, understood that life wasn’t going to be easy as she toiled from dawn to dusk on the cotton fields of South Carolina. Despite the weariness, uncertainty and the hardship she faced picking cotton in Dillon County, whose economy was largely based on agriculture as cotton remained one of the dominant products, Mother Kinloch, was determined to rise out of the Jim Crow South and join the Great Migration to the North.

Thompson said it is time for America to recognize Black women like Cousar Kinloch, who passed away on July 3 for their efforts in laying the foundation of the economy which was built on the backs of slaves. Though the Black women who worked on slave plantations were not invited to the Constitutional Convention in Philadelphia, Thompson said, it should not minimize their contributions to American history and how their blood, sweat and toil helped create the fabric of the free market enterprise.

Cousar Kinloch is the mother of Reverend Solomon W. Kinloch Jr., the renowned senior pastor of Detroit’s Triumph Church, the largest African American congregation in the city, and which Outreach Magazine described as one of the fastest growing Black churches in America.

Reverend Kinloch invited Thompson, whose insightful journalistic work has been noted for its glaring contributions in the continuing fight for racial equality to not only write the obituary tribute for the funeral program as well as deliver the opening tribute for his mother’s homegoing service held on July 10 at Triumph Church’s campus on Detroit’s eastside, 2760 East Grand Blvd.

Earlier this year, The PuLSE Institute, launched the “Reverend Solomon W. Kinloch Jr. Lecture Series on Church Influence on Social Equity and Economic Justice,” a Black Church Lecture Series named after the Detroit clergyman, who is one of the leading voices in the faith community pushing for an inclusive economic recovery in the city.