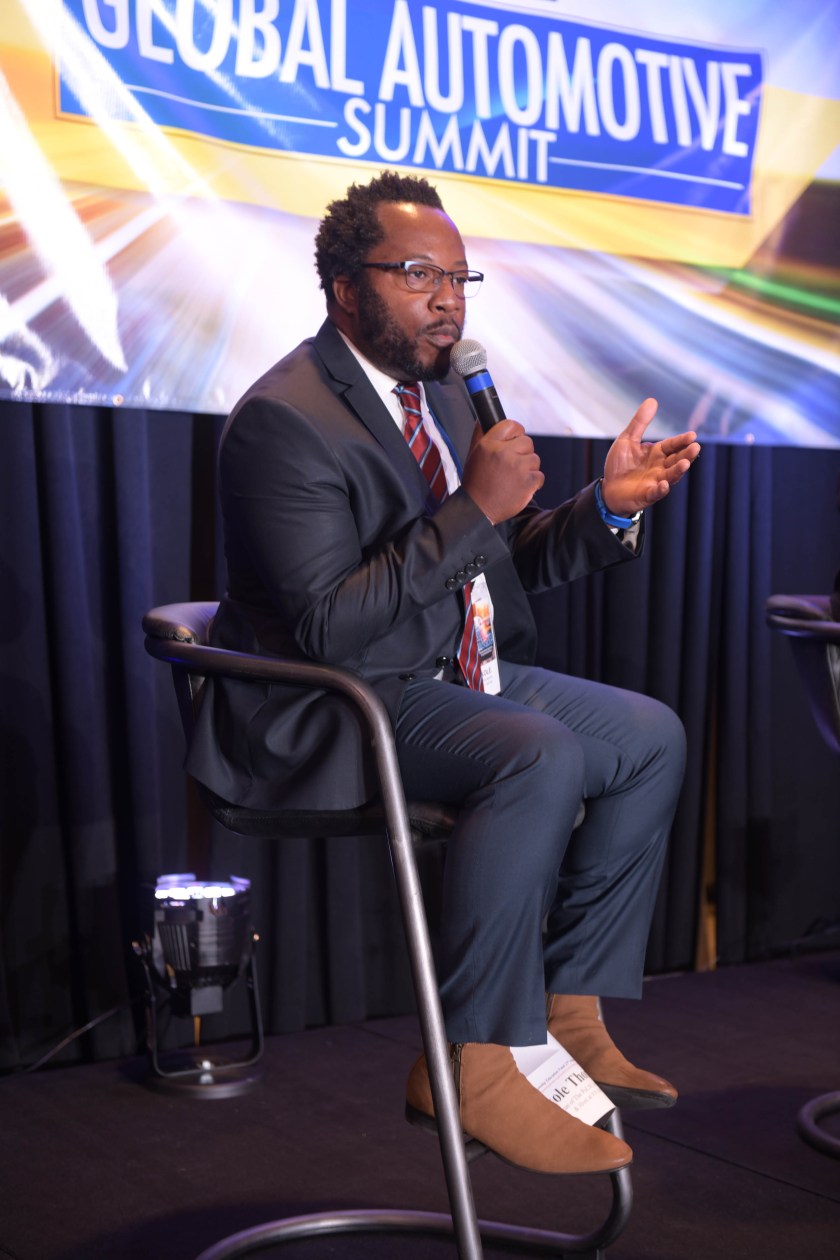 President’s Note: This column is part of The PuLSE Institute’s  Douglass Project, which examines issues of race, equity, democracy and poverty. For inquiries contact Attorney Tina M. Patterson, the president and director of research at The PuLSE Institute at info@thepulseinstitute.org.

By Anthony B. Mottley

Frederick Douglass, the foremost 19th century Black abolitionist, who was born into slavery and taught himself how to read, addressed the condition of 1860s African Americans from this perspective: “Better to die free than live as slaves.”

The statement coming from one of America’s great journalist and orator seems harsh, but it is born out of Douglass’ lived experience.

As a young journalist in his twenties, Bankole maintained the primary tenets of journaled truth and accuracy. Thompson took on mayors, governors, and even a past employer in his quest for justice and editorial independence. Thompson delivers his perspective without fear or favor.

In Detroit, the nation’s largest African American city, where Black voices in journalism and opinion writing have declined dramatically, Thompson stands alone as the only prominent Black political opinion columnist for either major newspapers writing a twice-a-week column. He is the leading critic of the uneven economic recovery of Detroit in the mainstream media.

Beyond his vaunted position, Thompson has humbly used his radio, social media platforms and The PuLSE Institute, Detroit’s national anti-poverty think tank, which was founded in 2018 based on his writings about poverty and economic injustice,  to expand his coverage of the Black struggle to far-reaching places such as Flint and Benton Harbor. Speaking truth to power is what he does.

Bankole Thompson’s voice is heard across the nation. During the crucial 2020 presidential election, he provided important perspective on national television about the authentic Black experience, and how it relates to the undying issues of poverty affecting Black people.

Given his unique position as the foremost intellectual Black voice in the media on the issues affecting modern Detroit, Thompson, and David Axelrod, former senior adviser to President Barack Obama did a joint panel on CNN Inside Politics with host John King ahead of the July 29, 2019, Democratic presidential debate in Detroit to highlight how urban America will shape the outcome of the election.

Because of his commitment for telling it like it is, Thompson, during the lead up to Democratic presidential nominee Joe Biden selecting a vice presidential running mate in 2020, made a strong case in his column for Biden to select a Black woman to be on the ticket. After Kamala Harris was named the VP candidate, Bankole Thompson was invited by CNN to appear on a panel to respond to the selection of Harris based on his column that strongly advocated for a diverse presidential ticket.

One of the high points of Bankole Thompson’s enduring and courageous journalistic career came in 2016 during the heated presidential campaign, when he was sued by a prominent White nationalist for a column he wrote about the campaign of Donald Trump and the Ku Klux Klan. Late Detroit News publisher and editor and former Associated Press executive editor Jonathan Wolman, who personally recruited Thompson to join the newspaper stood firmly behind him. Wolman hired James Stewart and Len Niehoff, two of the best First Amendment lawyers to defend Thompson in court.

After an 18-month legal tussle, the Michigan Court of Appeals, in a unanimous three-judge panel ruled in favor of Bankole Thompson and the newspaper, affirming that his columns were protected political speech, and as such the lawsuit against him had no merit.

The Appeals Court verdict which was a major First Amendment victory for journalists in the nation who have come under aggressive attack for their dogged coverage of the Trump era, was a published opinion, a very rare occurrence, setting precedent for the legal case about Bankole Thompson to be cited as legal authority by other courts, legal scholars, law students and practicing lawyers for generations to come. Only a small percentage of cases result in published opinions.

The ruling which is now case law in Michigan, unquestionably remains one of great national and historic significance in the Black community because it underscores the nexus between race and the First Amendment.

Before The Detroit News announced in a front page story six years ago that Thompson was joining the newspaper as an opinion columnist, Wolman, the then publisher said, “Bankole Thompson is a top-notch journalist whose insightful writing and editing have set a high standard.”

Beyond his journalism, like Douglass, Thompson, has reached across races to champion fair play and racial justice in the Jewish, Arab American and Hispanic communities maintaining what Reverend Martin Luther King Jr., leader of the Civil Rights Movement said that, “Injustice anywhere is a threat to justice everywhere. We are caught in an inescapable network of mutuality, tied in a single garment of destiny.”

And in recognition of his bridge building efforts, in 2015, the Jewish Community Relations Council, the public affairs voice of the Jewish community in Michigan, honored him with a special award called, “Tzedakah,” during its annual meeting at the Max Fisher Federation Building in Bloomfield Hills. The award in Hebrew means justice, righteousness and charity.

“Bankole Thompson is a gifted journalist. More importantly, however, he is a sensitive soul, attuned to the transcendent themes of potential and possibility in our fragmented world,” said Daniel B. Syme, rabbi emeritus of Temple Beth El, the oldest Jewish congregation in Michigan, who was inducted into the Martin Luther King Jr. Board of Preachers at Morehouse College, and one of the leading rabbis in North America.

Civil rights leader Rev. Jesse Jackson Sr., president and founder of the Rainbow PUSH Coalition, makes it a point to reach out to Thompson for on and off-the-record conversations about issues of national importance whenever he is in Detroit.

In 2018, during the 50th anniversary of the assassination of Dr. King, Jackson, honored Thompson with the “Let Freedom Ring Journalism Award,” at Cobo Convention Hall in downtown Detroit, where Dr. King gave the first draft of his “I Have a Dream,” speech to underscore Thompson’s unfailing commitment to racial and economic justice.

“Given your persistent and passionate op-eds on poverty and racial justice in The Detroit News that clearly prick the conscience of policy makers and bureaucrats, and your community events that empower the voiceless and drive conversations toward an inclusive and equitable Detroit, it is our deep-seated hope that this award will serve as a radiant call to use your powerful platforms to do even more for the ‘least of these’ in Detroit and our nation,” Jackson wrote in the 2017 nomination letter.

On a personal note, I have known Bankole since he launched his journalism career in the Detroit market. As the producer of the long-running Detroit PBS Series, American Black Journal, I invited Thompson on our program, and he did one of the most profound things that I’ve ever experienced. During our conversation and debate on the program, Bankole Thompson quoted Napoléon Bonaparte. The late veteran host of the program and fellow journalist Cliff Russell and I looked at each other with recognition. Bankole Thompson was not just some newspaperman, he was a journalist and a thinker on a mission, and we decided at that moment to do all we could to help him rise.

“Bankole Thompson is a lover of truth, which, by definition, makes him a hater of untruth. Thompson is a young lion. He is one of the brave souls who refuse to give in to the onslaught of pseudo-journalism and the handsome salaries paid to those who practice it. He possesses (or has been possessed) by the aforementioned spirit, ensuring that authority will always be questioned and its abuses will never go unchallenged,” Cliff Russell wrote in the foreword to Thompson’s 2006 book, Ignoring The Underprivileged, a critique of the media’s coverage on issues of race and class. “Bankole Thompson’s work needs to be read, and his voice needs to be heard.”

Over the years, Bankole has slain dragons in his path. He has stood up for himself with class, dignity, and an eloquence of language that baffles his enemies. Still, a young man, Bankole Thompson, is well on his way to fighting the good fight for Black people and living up to Frederick Douglass’ standard of living free or dying.

Bankole, sees the importance of investing in young people, which is why in our conversations he tells me about the need to support young people. He has led leadership trainings for high school students in The PuLSE Institute’s Junior Fellows program, and written countless recommendation letters that have enabled students to enter top universities and graduates to tap employment opportunities.

Bravo, Bankole. Your work is a continuation of the finest and boldest tradition of the prophets of the Black freedom struggle.

Anthony B. Mottley, a longtime Detroit media veteran,  is an Emmy award-winning producer and media maker. His Open Source podcast is available on multiple platforms.