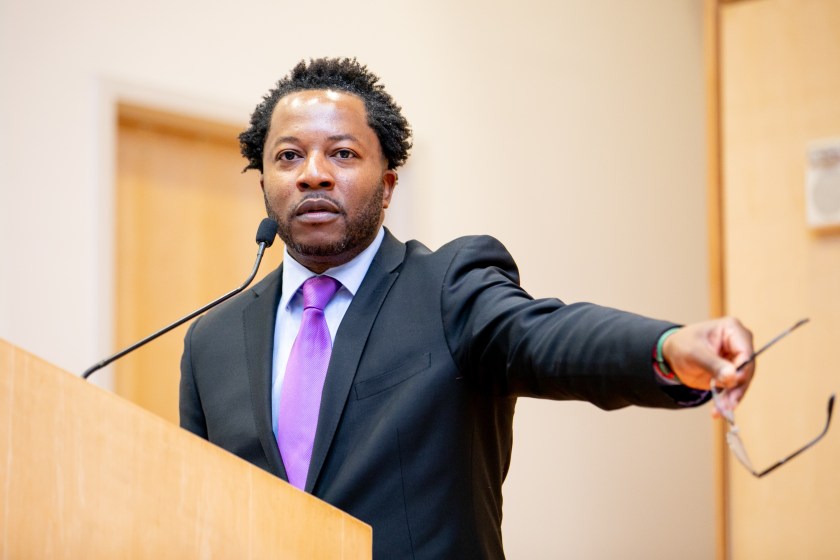 After years of bold and courageous journalism anchored on challenging the political and economic forces of the time to meet the needs of disenfranchised and dispossessed communities, Bankole Thompson, the nationally renowned and distinguished Black journalist, author and cultural critic, will next year release his definitive book that captures his more than two decades of speaking truth to power.

Titled Fiery Conscience: A Treatise on Two Decades of the Impactful Journalism of Bankole Thompson, the book will be released in July 2023, and marks a significant feat in the storied career of the Detroit-based national journalist, whose work is known for probing uncomfortable issues of race, freedom and justice.

The book, a compendium of analytical essays about the multidimensional impact of Thompson’s journalism across the political and cultural spectrum, is a vivid and penetrating account from the lens of individuals who have observed his work as well as those who have been positively impacted by his knack for holding power accountable.

Thompson, 43, is the executive dean and editor-in-chief of The PuLSE Institute, a national anti-poverty think tank, which was founded based on his work on race, democracy and poverty. He is a twice-a-week opinion columnist at The Detroit News, where his column on presidential politics, leadership, culture and socioeconomic issues appears on Mondays and Thursdays. He is host of the daily two-hour radio program REDLINE on 910AM Super Station-Detroit as well as the host of Sunday Nation with Bankole Thompson, a weekly public affairs and newsmaker television program, which airs on Sundays from 1pm-2pm on MyTV38 WADL-Detroit.

Writing in the book, the historian, author and journalist Herb Boyd, who is noted for his works on Malcolm X and James Baldwin, and who recently wrote “Black Detroit: A People’s History of Self-Determination,” called Thompson a writer “Imbued with a sense of uncommon integrity and the courage, as we used to say, ‘to tell like it is!’ That honesty was something most readers were not prepared for but Bankole then, and now, is determined to express his views and let the chips and gripes fall where they may.”

Boyd explains in the book that he had long admired Thompson, “Since the very beginning of our stands on the rampart, and it’s good to know that this particular enterprise comes at a most conspicuous time in our nation’s history, that in President Biden’s estimation is at an ‘inflection point,’ and that’s nothing new for a frontline journalist like Bankole.”

Boyd adds, “Bankole is a resourceful agent in our fight for democracy and human rights.”

Janis F. Kearney, former journalist and newspaper publisher in Arkansas, who served as the first presidential diarist in the history of the White House under President Bill Clinton, wrote the book’s epilogue. In powerful prose, Kearney, a former fellow at Harvard University’s W.E.B. DuBois Institute, tells readers that Thompson’s didactic work is needed today, and that it is reminiscent of the journalistic crusades that were led by towering Black journalists in Arkansas and other places in the American South during the Civil Rights Movement.

“It is gratifying for a native of the Arkansas Delta region and child of cotton sharecroppers to know that we still have a social commentator and leader who remains an unapologetic advocate for the poor and downtrodden. While American politics is oftentimes a murky, messy undertaking; the practical, realistic, yet hopeful Bankole Thompson knows that good politics can mean social and economic change for the masses. And, that good politics can result in policies, laws and civil actions that make life better for the least of us and addresses the dignity of all—including America’s poorest,” Kearney wrote. “But, good politics doesn’t just happen. It needs advocacy and fiery voices like Bankole Thompson’s. Voices that worry the lawmakers at night, that remain, like ‘earworms’ in their subconscious as they make and act on decisions that are crucial and life-changing for everyday Americans.”

Reverend Canon Leonard L. Hamlin Sr., the Canon Missioner and Minister of Equity and Inclusion at the Washington National Cathedral is among those praising the book.

“The problems of our past are not resolved by turning a blind-eye, or by commitment to silence. Bankole Thompson’s needed witness displayed a courage and faith that inspires us to move beyond complacency and into prophetic action. His ‘Impactful Journalism’ has raised the uncomfortable questions and exposed circumstances that were in need of transformation,” Hamlin said. “It is a must read for those who have a concern for where we have been but more importantly for where we are headed as a community. By reading this work I was inspired to remember the words of Maya Angelou that stated, ‘You can’t really know where you are going until you know where you have been.’”

Sister Simone Campbell, leader of the historic “Nuns on the Bus” campaign, who is perhaps the leading anti-poverty champion in the modern American Catholic Church, and a social justice advocate has followed Thompson’s work over the years. She read the manuscript and offered a commendation.

“In the midst of these turbulent times in our nation, we need Fiery Conscience more than ever. We are all called to speak out for the sake of truth and struggle together across divides to realize a justice that includes all. Bankole Thompson does just that and his witness can nourish our spirits,” said Campbell, recipient of the 2022 Presidential Medal of Freedom.

Leading and diverse voices across the spectrum of human rights and the academy are also offering advance praise for the book.

“Bankole Thompson’s Fiery Conscience is a tribute to his fearless journalism exposing third world problems in a first world country. At once inspiring and shameful that we continue to harbor problems like racism and lack of basic infrastructure,” wrote Dr. Arun Gandhi, the grandson of Mahatma Gandhi, and the founder and president of the M.K. Gandhi Institute for Nonviolence.

Dr. Ashraf Esmail, endowed professor of criminal justice and the executive director of the Center for Racial Justice at Dillard University in New Orleans wrote, “Through journalism, Bankole has challenged us to create a more equal and just society for everyone. Fiery Conscience is a must read for those interested in understanding the importance of journalism as an avenue in changing society.”