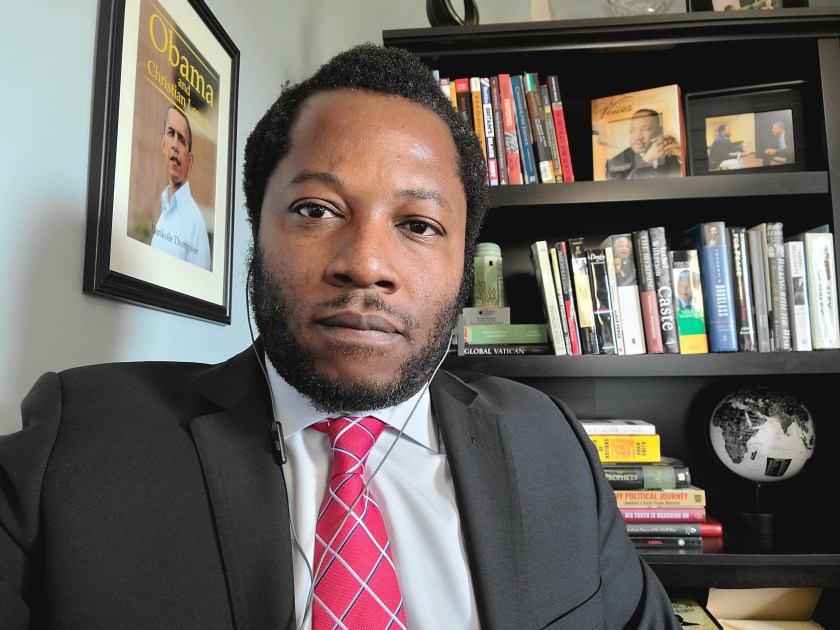 Black employees at Lockheed Martin, the Maryland-based global security and aerospace company, were told last month to seriously engage in the issues driving the Black Lives Matter movement, and work towards creating social transformation if the conditions of Black people are going to change in this era.

That was part of a message that Bankole Thompson, the editor-in-chief and dean of The PuLSE Institute, and one of the most outspoken journalists on race in the nation delivered at Lockheed Martin’s Black Excellence Council Leadership Panel on May 6. Thompson was invited to participate in the virtual forum, which is part of the defense company’s Belonging Leadership Development series, a program that encourages intimate dialogue on key issues affecting its employees of different backgrounds. He is an opinion columnist at The Detroit News where he writes a twice-a-week column on politics and culture and also a daily radio show host.

A cultural and political critic whose work on race and economic justice issues has been noted for its contributions to the continuing fight for racial equality, Thompson, challenged the Black employees to step up and be a part of the movement for change.

“Black Lives Matter is not another buzz word. It is about changing our conditions, our lives. It is about our self-knowledge, self-direction and self-determination,” Thompson said. “We have an obligation to not ignore the national reckoning for racial justice just because some of us may be doing fine. What about the masses of Black people who are dealing with a plethora of issues including poverty and the criminal injustice system? You don’t have to wait until you are pulled over and humiliated by a police officer and your constitutional rights violated before you realize that Black lives do matter.”

During the forum, Thompson, specifically discussed the role of the Black middle class saying that they bore greater responsibility to use their resources and prestige to help lead the fight for racial justice.

“Some of you here are proud members of the Black middle class. You have a good life working at a major defense company. But that doesn’t excuse you from seeing the need to take on the fight for equity that is playing out in Black communities,” Thompson said. “We must band together and see that what affects one disenfranchised Black person, affects the entire Black community because your bank account doesn’t shield you from becoming a victim of inequality.”

During the discussion which also centered on the global Black diaspora, Thompson spoke about the international impact of George Floyd’s death on the push to end police misconduct.

“The death of George Floyd was an international event. It triggered demonstrations all over the world and for the first time in the modern era, we saw a global reawakening on the persistent quest for racial justice. That it doesn’t matter where you are around the world, you can become the victim of unspeakable police brutality,” Thompson said. “We must seize on that international solidarity that came out of last year’s summer of demonstrations because of the death of Floyd to work together with our brothers and sisters from around the globe to end the nightmare of racism.”

In his presentation, Thompson cited the works of the late civil rights activist Reverend Leon Sullivan, who in 1971 became the first African American to sit on the Board of Directors of General Motors as an example of a man who forced a major corporation like GM to divest from the South Africa’s apartheid regime which imprisoned Nelson Mandela. Sullivan, an anti-apartheid crusader, whom Mandela would later thank for joining the international fight against apartheid, led a successful boycott of corporations in Philadelphia leading to mass employment of Black people through Operation Breadbasket. The Reverend Martin Luther King Jr., brought Sullivan to Atlanta in October of 1962 to discuss with local ministers there about replicating the program.

“We don’t need to reinvent the wheel. We have a historical template looking at what courageous people like Reverend Sullivan were able to accomplish. All we have to do is to look back at history and see what our mandate ought to be in 2021,” Thompson told Lockheed Martin’s Black employees. “Don’t wait until injustice knocks on your door before you start demanding change. Use your power and resources and take a stand. It means nothing to have lived a successful life with a high paying job working at Lockheed Martin if your legacy doesn’t say you helped to break down the chains of discrimination and racism.”

Thompson has been described by the Eisenhower Foundation in Washington D.C. as a “courageous voice on behalf of the dispossessed and disenfranchised, a shining example of journalism for the public good.”

His column in The Detroit News deals with presidential politics, culture, public opinion, leadership and socioeconomic issues. He’s authored a pair of books about former President Barack Obama based on a series of exclusive sit-down interviews with Obama.

In 2018, Thompson was honored with a Congressional Record testimonial by U.S. Representative Debbie Dingell officially placing his body of work into the record of the Congress.

A media thought leader Thompson, delivered the 20th Annual Slavery to Freedom lecture at Michigan State University last February, where he was invited to cap the two decades of the University’s Lecture Series on the Black freedom struggle, and whose previous speakers included the late Congressman and civil rights hero John Lewis and humanitarian and civil rights elder statesman Harry Belafonte.

For example, last summer after the death of George Floyd, Thompson, was featured in De Standaard, the leading Dutch-language newspaper in Belgium, the home of the European Union. He was interviewed in an hour long Q&A with the major European newspaper with a daily readership of 715,000 discussing the wider implications of Floyd’s death and what it means for American democracy, the administration of justice in urban cities like Detroit.

In recognition of his journalistic contributions, the University of Michigan Bentley Historical Library in 2015, established the “Bankole Thompson Papers,” a comprehensive physical and digital collection to preserve Thompson’s work for students and scholars from around the world. The Bentley houses the papers of every Michigan governor and other key figures in the state’s history.

As editor-in-chief of The PuLSE Institute, a national independent anti-poverty think tank headquartered in Detroit, the nation’s largest African American city, Bankole Thompson, provides editorial and strategic leadership that positions the Institute across various fronts in the marketplace of ideas as an anti-poverty voice. He is responsible for the ethical framework for editorial and what is published and decides the Institute’s position on the major issues of the day.

As dean of the Institute, Thompson oversees its most prestigious program, the Academy of Fellows, which is made up of leading professionals serving as senior fellows from various backgrounds with a commitment to fighting poverty.