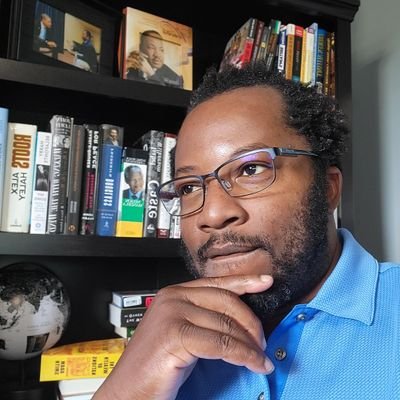 Bankole Thompson the editor-in-chief and dean of The PuLSE Institute, Detroit’s national anti-poverty think tank, who is a twice-a-week opinion columnist at The Detroit News, announced recently on his daily two-hour radio program REDLINE on 910AM Super Station-Detroit, that he will be returning to Benton Harbor to host a live town hall broadcast on Saturday, Nov. 6, 12-2pm about the current water crisis.

As Thompson wrote in his Oct. 21 newspaper column, the special broadcast on 910AM will, “further examine the issue and to highlight the voices of legitimate discontent,” regarding the ongoing lead water crisis that has confined residents of Benton Harbor to drinking bottle water for now.

The announcement from the nationally renowned journalist and culture critic who is best-known for championing issues of inequality, is coming two years after Thompson visited Benton Harbor, the smallest Black city in the state of Michigan. He spent several days there chronicling the challenges of racial and economic inequality and demanding that Democrat Gov. Gretchen Whitmer back down from closing the only high school in the impoverished city.

During his 2019 trip to Benton Harbor, Thompson, was taken on a tour of the city by Reverend Edward Pinkney, the city’s civil rights leader, where he visited the homes of Black families and sat down and listened to their stories about the need for the Benton Harbor High School to remain open.

Thompson wrote seven newspaper columns about Benton Harbor, the most he’s written on one particular subject, challenging the Whitmer administration to articulate an urban educational agenda , while insisting that the school should remain open in the poverty-stricken majority Black community. It was groundbreaking coverage because Benton Harbor has not been a favorite topic for discussion in the major media in southeastern Michigan, the political power center of the state.

He reiterated the call to save a city that mirrors all of the challenges of urban America on his radio program incessantly describing how the story of Benton Harbor is inextricably linked to the future of Black Michigan, and why the conditions of the city fit the definition of structural inequality and systemic racism that permeates every urban community.

Thompson emerged as the most outspoken and prominent Black voice in the Michigan mainstream media, who has courageously and consistently highlighted what was taking place in the attempt to shut the high school in Benton Harbor, and challenging what he often referred to as “the hypocrisy of the White liberal order,” in its relation to Black communities.

The spotlight that the longtime respected Detroit journalist brought to the Benton Harbor educational crisis became a defining moment for the Whitmer administration, and it successfully forced the governor to back down from closing the school.

Later that year, in November of 2019, Thompson, delivered the opening keynote address at the 5th Annual Statewide Youth Political Summit at the Mendel Center at Lake Michigan College, during which he criticized the actions of the state as lacking empathy.

The recent revelation that there is elevated lead in Benton Harbor’s water, which the state admitted it knew existed for the last three years, has become the new frontier of the fight for social and economic justice in that community. Thompson has been persistently keeping the issue alive on his show and has written several columns on the subject and demanding political accountability.

In his Oct. 18, column, Thompson questioned why the Whitmer administration didn’t move three years ago to address the lead water crisis, and he called out Democrats for failing Benton Harbor, while urging the governor to visit the city immediately instead of sending aides to speak on her behalf.

“Whitmer shouldn’t send deputies to Benton Harbor. She needs to go there herself and sit down with the families who just found out that they’ve been drinking water exposed to lead. The buck stops with her, and she should lead this recovery,” Thompson wrote.

On the same day the column was published, GOP Senate Oversight Committee Chairman Ed McBroom, sent a FOIA letter to the Whitmer administration demanding documents relating to the water crisis over the last three years. The following day, Whitmer traveled to Benton Harbor for a meeting and shared photos of her trip on social media.

Pinkney’s demand for clean water continues. He signed a petition sent to the Environmental Protection Agency to intervene.

Thompson, also brought Benton Harbor on the White House radar and raised the issue with Gina McCarthy, the White House national climate advisor, and former EPA administrator, who appeared on his radio show on Sept. 14 to discuss President Joe Biden’s agenda. During the interview Thompson urged McCarthy to tell Biden to visit Benton Harbor, a request she vowed to take to the president.

Pinkney, the civil rights activist, who is a frequent guest on Thompson’s radio program, has repeatedly thanked the journalist for helping to bring great awareness to the multitude of issues facing the once ignored Black community in the southwestern part of the state.

“I really want to thank you for getting the word out and for giving me this platform because it is crucial that the people know. In that way we could fight back, not just as an individual but as a team,” Pinkney said.

On the coming radio broadcast in Benton Harbor that Thompson will be hosting, Pinkney, said, “I’m excited about you coming because this is going to be too good to even think about. We are going to let it all hang out. We are going to have people everywhere and they are going to tell you exactly what is going on in this community. They better get this thing right because right now she (governor) is losing this battle. She is losing it. Politically, she is really losing it, because people see her as someone who is not willing to go the extra mile for Black folks.”