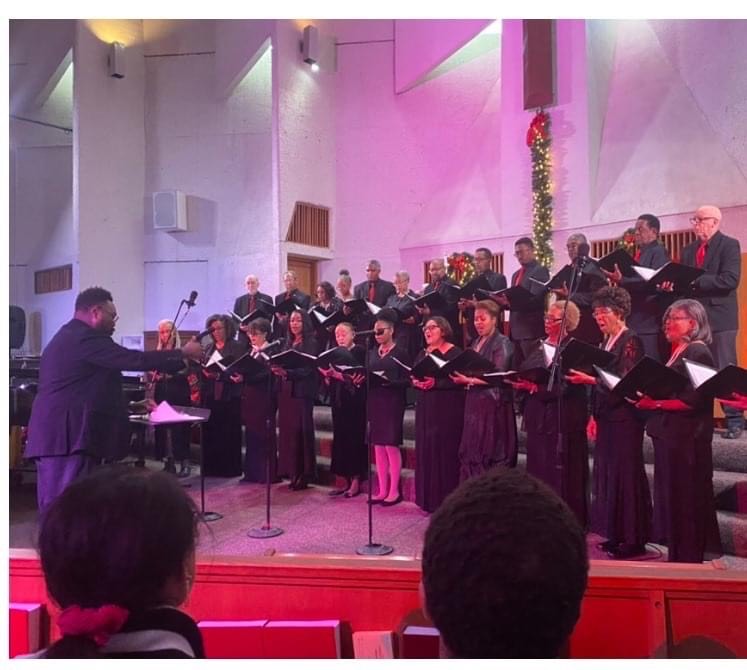 The distinguished Renaissance Choir at Plymouth United Church of Christ in Detroit, one of the leading African American churches in the country whose ministry is anchored on a theology of liberation, will perform a rendition of Black spirituals drawn from slavery and the civil rights movement at the launching of The PuLSE Institute’s “Reverend Solomon W. Kinloch Jr. Lecture Series on Church Influence on Social Equity and Economic Justice.”

The inaugural online Lecture Series, which is open to the public, will be held on Monday, April 5, 4-6pm, the day after the assassination anniversary of civil rights leader Reverend Martin Luther King Jr. To register for the series visit https://www.eventbrite.com/e/rev-freddy-haynes-to-keynote-lecture-on-black-church-and-social-justice-tickets-144804109991.

Reverend Dr. Frederick Douglass Haynes III, the senior pastor of Friendship West Baptist Church in Dallas, Texas, and one of the most influential African American ministers in the country, whose vibrant anti-poverty crusade brings moral clarity to the essence of the Black Church, will deliver the inaugural keynote address. Dr. Haynes, a scholar of liberation theology, is one of the nation’s leading thinkers on the subject of making the church relevant in the 21st century. In 2013, Haynes, delivered the special prayer at the Washington National Cathedral during the National Memorial Service for Nelson Mandela, former South African president, anti-apartheid icon and 20th century liberator. Former Vice President Joe Biden was one of the featured speakers at the Mandela memorial.

The Lecture Series is named after Solomon Kinloch, a nationally renowned Detroit pastor, who is one of the leading African American voices from the faith community pushing for an inclusive economic recovery in America’s largest Black city. Kinloch is the senior pastor of Triumph Church in Detroit, which Outreach Magazine, the Christian publication, has billed as one of the fastest growing Black congregations in the nation.

Lamar Willis, a veteran music educator who is the minister of music at Plymouth UCC will lead the Renaissance Choir’s performance.

“Plymouth UCC is honored to be a part of the launching of The PuLSE Institute Black Church Lecture Series in Detroit,” said Willis, who teaches music at the MacArthur K-8 University Academy in Southfield and is also a member of the faculty of the Horizons-Upward Bound program at Cranbrook Kingswood School.

Willis, who studied at the University of Michigan School of Music and serves on the Steering Committee for the Detroit Symphony Orchestra Annual Classical Roots Celebration underscored the importance of the music ministry at Plymouth Church.

“Here at Plymouth, we have a diverse music ministry,” Willis said. “You will hear from the Renaissance Choir, the longest serving choir at our church. Our goal is to keep the hymns spirituals and anthems alive in our present-day services. Thank you for listening.”

The Plymouth United Church of Christ Renaissance Choir, formerly known as the Senior Choir, according to Willis has been the backbone of the Plymouth UCC music ministry for generations. Several years ago, it was the only choir and consequently sang every Sunday even when the church decided to provide two services every Sunday.

“Our mission is to provide musical and spiritual enrichment for the church by uplifting the name of Jesus and worshiping God through song,” Willis said. “We did this on Sunday but engaged in other activities as well. Every year we presented the “Seven Last Words of Christ” on good Friday and for many years under the direction of Dr. Robert Harris, provided a well- received presentation of Handel’s “Messiah”. In addition each fall we in partnership with the Progressive Circle, sponsored a Classical Concert. Most recently, in celebration of our church’s 100th anniversary we elevated our performance of the “Seven Last Words of Christ “ by hiring a small orchestra and taking the whole production to the Charles Wright Museum Of African American History.”

Rev. Nicholas Hood III, the senior pastor of Plymouth UCC, has been leading the church’s commitment to address issues of inequality. In 2019, Hood wrote a column in The PuLSE Institute, where he said, “Given where Detroit presently is, and in light of the poverty crisis, the church must inescapably offer hope and relief to those who feel dejected and left out in the economic recovery by advocating for humane policies that will evidently transform the lives of majority Detroiters. In so doing, the church would be fulfilling its responsibility as an institution for social change.”

Plymouth UCC has remained an anchor in the city. Hood’s father the late Rev. Nicholas Hood Sr., was a civil rights activist, former member of the Detroit City Council, who played a pivotal role in the earlier development of Black political leadership in Detroit during era of Mayor Coleman A. Young. He was also among the founding members of the Southern Christian Leadership Conference under civil rights leader Rev. Dr. Martin Luther King Jr. In January of 2015, Hood and his father, honored nationally renowned journalist Bankole Thompson, the editor-in-chief and dean of The PuLSE Institute, with the church’s annual Martin Luther King Jr. Award for “Years of service to humanity.”

“We are glad that Plymouth’s esteemed Renaissance Choir will be performing some spirituals at this inaugural Black Church Lecture Series named after Pastor Solomon Kinloch, whose courageous public witness in the daily lives of ordinary people in modern Detroit brings real meaning to those spirituals that were the enduring fortress of the slavery experience and the civil rights movement,” Thompson said. “The church has an inescapable role to tackle inequity in a city that has been designated one of the highest concentrations of poverty in the nation.”